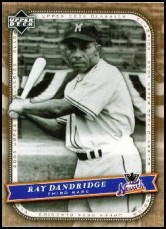 Ray Dandridge was considered by many to be the greatest third baseman in Negro Leagues history. A fine fielder and contact hitter, he is one of two Negro League third basemen who have been selected to the Hall of Fame.

Dandridge first played in the Negro Leagues at age 19. He was a utility man with the Detroit Stars and Nashville Elite Giants, hitting just .218. He joined Newark in 1934 and the rest, as they say, is history. As a sophomore he hit .408, either leading the league in batting or finishing second. Newark, a second-division team, began building around Dandridge. In 1935, he hit .340 and led the East-West League with 9 triples, finishing 5th with 9 doubles in 50 Newark games. That summer he was 4 for 11 in barnstorming games against Dizzy Dean, Bill Swift and Columbus pitcher Jim Winford. Newark became a contender in 1936, finishing 3rd behind the Pittsburgh Crawfords and Philadelphia Stars. Dandy slipped to .287 but the team had acquired help in the form of slugger Mule Suttles and power-hitting shortstop Willie Wells.

By 1937, Newark had moved to second, just short of the Homestead Grays. Dandy hit .342, Wells .320 and Suttles .345 while Leon Day went unbeaten on the hill. Dick Seay joined the team at second - the Dandridge/Wells/Seay/Suttles combo became known as the Million Dollar Infield. Dandridge made his only East-West Game, hitting 7th and playing third. That winter Dandridge played in Cuba and hit .299, stealing a league-best 11 bases.

1938 brought another fine hitter to Newark in the form of rookie Monte Irvin. Dandridge hit .346 but the team again finished shy of a title. Dandridge hit .328 in Cuba that winter. In '39, Newark again finished second to the Grays despite the Million Dollar Infield, Irvin, Day, Ed Stone and Biz Mackey. Dandy did not play for the Eagles that year - in the winter he again was in the top 10 in batting in Cuba, at .310.

By 1940, Dandridge's Negro League career was practically over by age 26, having made just one East-West game, but a reliably solid threat. His .350 Negro League average makes the top 10 all-time. That year he was one of the first Negro Leaguers signed by the Mexican League, which was trying to raise its profile with the big spending of the wealthy Pasquel brothers. Dandridge became an advocate for the Mexican League and began recruiting other blacks to play there. In '40, he hit .346 in 27 games for a Veracruz Blues team that featured Josh Gibson, Wells, Day, Martin Dihigo, Cool Papa Bell and Angel Castro - likely the greatest Mexican League team ever. In 1941, he hit .367, 3rd behind Wild Bill Wright and Gibson, and hit 8 homers while driving in 86 Runs in 101 games. In '42, he returned briefly to Newark, hitting just .186, while batting .310 in Mexico.

In 1943, Dandridge played the full year for the Blues and dazzled, hitting .354 and leading the league in hits and tying for the lead in RBI with 70. He slugged .505, a high mark for a guy known for singles and doubles. 1944 saw him play his last Negro League season. Rejoining Newark once more, he hit .370, 3rd in the Negro National League, leading a reconfigured team without Wells, Irvin or Day, with Suttles in a reduced role in his 21st year and with a young kid named Don Newcombe breaking in.

In 1945, Dandridge hit .366, 9 points behind Cuban contact specialist Claro Duany for the league lead. Again Dandy went to Cuba in the winter and he hit .318, second behind Ducky Davenport. Minnie Minoso made his debut that year and Marianao teammate Dandridge became his idol.

1946 saw a handful of major leaguers come to Mexico - Dandridge outhit these big-leaguers with no problem, turning in a .323 season and finishing 3rd in the league in runs (79) while stealing 24, his best in a Mexican season. Bill Veeck offered Dandridge a contract in 1947, but he turned it down due to his love for the game in Mexico. '47 again saw him square off against Sal Maglie and Hal Lanier and Dandridge again did the job, batting .329 with 90 runs, 23 steals and leading the league with 169 hits. '48 saw him again lead the Mexican League in hits (his 3rd such title) while batting .369 to win his first batting title south of the order. In 8 years in Mexico, Dandridge had hit .347. he was elected to the Salon de la Fama in 1989.

Dandridge finally broke into the minor leagues in 1949. Joining the New York Giants' Minneapolis Millers farm club (the first black in team history), Dandridge hit .363, 5 points behind league leader Tom Wright. 1950 was another excellent year - he hit .311, scored 106 runs and led the league's third basemen in fielding by 29 points. His great season earned him the American Association MVP Award. The Giants did not call him up and the 38-year old returned to the Millers in '51, where he helped teach Willie Mays. Despite the presence of Hall of Famers Mays, Dandridge and Hoyt Wilhelm, Minneapolis still finished in the second division. Still making contact, Dandridge again solidly topped .300, at .324. In 1952, Dandridge finally slipped under .300 - he hit .291 and turned 39 late in the season. Surprisingly the man known for his lack of clout delivered ten homers, but then again Nicollet Park was famous for being power-friendly. Dandridge again led the league in fielding at the hot corner.

In 1953, Dandridge moved to the Pacific Coast League and the Oakland Oaks and at age 39 moved to second base! He hit .268, showing declining contact skills and didn't have much else in his game - no homers, 16 walks in 270 PA, one steal. Age had caught up to the top third baseman in Negro League History.

Dandridge is a hard guy to judge among the all-time greats. He was a two-dimensional player mostly - contact and glovework, with some speed and gap power, but few walks and almost no homers. A major league equivalent might be George Kell with much better defensive skills. Dandridge's rank as the top 3B in Negro League history merely shows that the position lacked depth relative to SS or CF in the NLs. There are no qualms with Dandridge being in the Hall of Fame, but he possibly is not one of the top 10 3B ever. On the other hand, he probably was a better player than Bill Madlock, the top black 3B in later major league history.