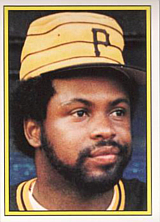 Bill Madlock was a four-time batting champion, and nearly won a fifth title. He won batting titles in 1975, 1976, 1981 and 1983, and finished second to Al Oliver in 1982. Despite his batting skill, in the first year he was eligible for Hall of Fame voting by the BBWAA in 1993, he got only 4% of the vote and was dropped from the ballot. He was a valuable contributor to the 1979 Pittsburgh Pirates team that won the 1979 World Series, as well as to the division-winning Los Angeles Dodgers team of 1985 and Detroit Tigers of 1987. His lifetime OPS+ is a respectable 123. With the Chicago Cubs in 1976, he hit .339 with a .500 slugging percentage. He could also steal a base, with a high of 32 stolen bases in 1979. As a defensive third baseman, he never won a Gold Glove, but he was not an embarrassment either (the San Francisco Giants used him at second base for a year and a half).

The similarity scores method shows the most similar player as Carney Lansford, another batting champ, although Lansford had a lower OPS+ and a lower lifetime batting average. There are two Hall of Famers on Madlock's list - George Kell and Home Run Baker. Batting champ Harvey Kuenn is also on the list.

Bill was the last team captain the Pittsburgh Pirates have had, being named to the position after Willie Stargell retired in 1982. 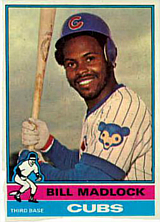 Bill Madlock was raised in Decatur, Illinois and spent most of his life there. He played organized baseball in youth leagues and all-star teams formed in the town. After being drafted by the St. Louis Cardinals in 1969 and the Washington Senators in 1970, he played in the Senators/Rangers organization from 1970 to 1973, most notably hitting .338 with 22 home runs for the Spokane Indians in 1973, leading th Pacific Coast League in runs scored.

Bill broke into the majors with a splash in 1973, hitting .351 in 21 games at the end of the season for the Texas Rangers. The team lost 105 games despite having talent such as Rico Carty, Alex Johnson, Jeff Burroughs, Toby Harrah and Jim Fregosi. Billy Martin managed the team for the last 23 games of the season.

Before the 1974 season, the Rangers traded Madlock to the Chicago Cubs to get Fergie Jenkins. The Cubs, like the Rangers, used Madlock at third base. Bill spent 1974 to 1976 with the Cubs, hitting over .300 each year and winning the batting championship in 1975 and 1976 as a 24 and 25-year-old. He was third in the Rookie of the Year voting in 1974 (Bake McBride, who also hit over .300, won the award), twelfth in MVP voting in 1975 and sixth in the voting in 1976 although the Cubs were not contenders either year.

After the 1976 season the Cubs traded Madlock to the San Francisco Giants in a deal that brought Bobby Murcer to the Cubs. In his first two seasons with the Giants, 1977 and 1978, Madlock continued to hit over .300, although in 1978 the Giants' ballpark was pretty favorable to pitchers rather than hitters. Although Madlock's OPS+ was 144, ninth in the National League, he was not a factor in |MVP voting as teammate Jack Clark (with a 152 OPS+) finished fifth.

Madlock started slowly in 1979 and was traded to the Pittsburgh Pirates in June. The Bucs went on to win the 1979 World Series. Bill hit .328 in his 85 games with them and had an OBP of .483 in the Series. He batted sixth in each game of the Series, usually behind Willie Stargell as the number five hitter. Bill stayed with the Pirates through most of the 1985 season. Although the Giants had used him at second base for part of his time in San Francisco, because they had another very good third baseman in Darrell Evans and wanted to keep both men in the starting lineup, the Pirates used him at third base exclusively. He won two more batting championships with the Pirates, and also hit .319 in 1982, finishing second in the NL. His highest MVP finish during his years in Pittsburgh was eighth in 1983, a year in which the Pirates went 84-78.

The Los Angeles Dodgers picked him up on August 31, 1985, just in time for the stretch run, and he got a lot of attention for hitting .360 during his 34 games with them. He also hit .333 in postseason play. He had a positive image in L.A. as a mature, useful veteran, and played as a regular in 1986 for manager Tommy Lasorda, but when he struggled at the start of 1987, he was released on May 29th, and signed as a free agent with the Detroit Tigers at age 36. Bill posted a respectable batting line of .279/.351/.460 for the Tigers, who won their division with 98 victories under manager Sparky Anderson after an epic struggle with the Toronto Blue Jays. Bill's last major league appearance came in the 1987 ALCS, which the Tigers lost to the Minnesota Twins.

Should Bill Madlock be in the Hall of Fame? It's clear that in earlier decades a four-time batting champ would have been a very strong candidate, because batting average was the statistic that most fans focused on. He never finished in the top five in MVP voting, although one can argue this is perhaps a bit unfair; he played the vast majority of his career for "small market" teams that didn't get the attention of, say, the New York Yankees. He did come to the Dodgers for a division-winning season, but he was only on the team beginning August 31st that year.

His lifetime batting average is .305, which compares with George Brett, another third baseman at .305. However, Brett was able to play 21 seasons and score over 1,500 runs with more than 3,000 hits, while Madlock had around 2,000 hits and fewer than 1,000 runs scored. A stronger comparison might be with Hall of Famer Billy Herman, who hit .304 lifetime but never won a batting championship. Herman, who also played for the Cubs, was a 10-time All-Star second baseman who led the league four times in Range Factor defensively, while Madlock, a three-time All-Star, was not a defensive star.