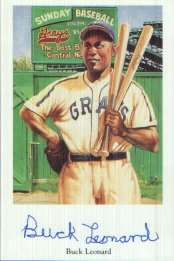 He and Josh Gibson, teammates on the Grays, were often compared to Babe Ruth and Lou Gehrig. Gibson batted third with Leonard cleanup. Gibson hit towering homeruns while Leonard hit screaming line drives to all parts of the field, sometimes to the wall and sometimes over it. But from there, the analogy breaks down. Ruth, Gehrig and Leonard were all southpaws but Gibson was right-handed. And Gibson and Gehrig died in their thirties, Ruth in his early fifties but Leonard lived on to ninety. Leonard had no known consecutive games played streak (although he well could have) and Gibson's homerun records were never broken.

Walter Fenner "Buck" Leonard was born Sunday 8 September 1907 in Rocky Mount, NC, the son of a railroad fireman and the oldest of six children. He had to work after school at age 12 in a hosiery mill making stockings and as a shoeshine boy at a railroad station, when his father died during the 1919 flu epidemic. He soon finshed his schooling since his hometown had no High School for blacks and his family could not afford to send him out of town (he finally received a high school diploma when he was 52). He began working full-time at 16, putting brake cylinders on boxcars for a railroad shop.

He was a smooth-fielding, sweet-swinging first baseman and the backbone of the Grays' dynasty of the late 1930s and 1940s. Even-tempered, modest and loyal, the left-handed hitting Leonard was a model of consistency and one of the best pure hitters to play in the Negro leagues. He played in a record 11 East-West All-Star games, and his remarkable 17-year tenure with the Grays is the longest term of service with one team in Negro leagues history.

Leonard was equally smooth and consistent at first base. His sure-handed glove work was compared with that of Hal Chase and George Sisler. He was a master at catching low throws and nabbing bunters. He had an exceptionally accurate and powerful throwing arm and though not the traditional lanky first baseman, he could "catch everything". He was a smart fielder who always made the right play. He was a model of consistency, not a "fancy Dan" at the bag. Dependable and respected by his teammates, he was a steadying influence on the Grays. Regarded as Negro Baseball's most popular player, he was well-liked not only for his brilliant playing but his quiet, easy-to-meet manner and his spirit as captain of the Grays.

Leonard was one batter that pitchers feared the most. Stocky, chesty, with powerfully built arms and legs, plus big hands to navigate a piece of lumber through the strike zone in warp speed. Add to this a great love for baseball, a starving appetite to hit the white apple and a God-given talent to coordinate muscle mass, eye and mind into one powerful swing, and you have Leonard at the plate.

Teaming with Gibson, Vic Harris, Howard Easterling, Cool Papa Bell, Jud Wilson and others, the Grays won nine straight league championship from 1937 to 1945, with a repeat performance in 1948. In 1948, 40-years-old, and without the late Gibson batting behind him, pitchers still respected Leonard. He tied with teammate Luke Easter for the Negro National League homerun crown with 42 and grabbed the batting title with a .395 average.

The 1948 edition of the Grays was Leonard's favorite team. They featured Easter, Sam Bankhead, Luis Marquez with Red Fields as their ace. The Grays defeated an up and coming Birmingham Black Barons team who featured rookie Willie Mays, for an unprecedented third Negro World Series championship.

His only appearance in Organized Ball came at age forty-six, in 1953, when he played 10 games for Portsmouth (Piedmont League) and batted .333.

Leonard compiled a lifetime .341 average in the Negro National League and a .382 mark in exhibitions against major leaguers. He made a record 12 appearances in the annual East-West all-star game, hitting .317 with an all-star record three HR.

After the Grays disbanded, Leonard played in Mexico from 1951 to 1955. He liked the warm climate, having spent winters on the diamonds of Cuba, Puerto Rico and Venezuela. In 1962 he helped organize the Rocky Mount (Carolina League) club and served as its vice-president.

Ultimately, Leonard was one of the first Negro Leaguers to be honored by the National Baseball Hall of Fame. The Hall established a Negro Leagues Committee, and enshrined Satchel Paige as their first honoree in 1971. Leonard and Gibson, fittingly, were next in line (JR).

After retiring permanently as a player in 1955, Leonard worked as a truant officer, physical education instructor and as Rocky Mount's vice-president, a team of which he was also a board member. He was also president of the Buck Leonard Realty Agency.

In 1994, the Major League All-Star Game was held in Pittsburgh, hometown of the Grays, and the 88-year-old Leonard was named an Honorary Captain. He appeared wearing a model of a Grays uniform. He was one of Negro League baseball's foremost ambassadors until his death.

In 1999, he ranked Number 47 on The Sporting News' list of the 100 Greatest Baseball Players, one of five players so honored who played all or most of their careers in the Negro Leagues, and was nominated as a finalist for the Major League Baseball All-Century Team.

He died at age 90 from complications of a stroke suffered more than a decade earlier at Nash General Hospital in his hometown of Rocky Mount, NC and is buried in Rocky Mount. He was survived by his wife Lugenia; a stepson, Thomas Fox; three stepdaughters: Florence Watson, Rose Hunter and Barbara Fox; and a sister, Lena Cox. His first wife, Sarah, died in 1966.

In 1938, Clark Griffith, owner of the Washington Senators, called Leonard and Gibson into his office and asked them if they would like to play MLB. Of course they assented. But nothing ever came of it as Griffith backed down, deciding not to disturb the status quo.

In 1948 Branch Rickey entertained the idea of offering Leonard a shot with the Dodgers, but nothing ever came of that either.

And in 1952 Bill Veeck offered him a chance to play with the St. Louis Browns. Leonard's age was against him and he knew the opportunity had come too late. He said he "didn't want to embarrass anyone or hurt the chances of those who might follow."

A salary of $125 a month in the Depression year of 1933 was better than unemployment, but it did not excite a working man's visions of the finer things in life. It required a lot of skimping and a bit of conniving if you were performing in the Negro leagues that functioned in the eastern portion of the United States at that time. "The thing to do," recalled Leonard, was "to borrow enough from the club so you'd be in debt at the end of the season. Then you could be sure they'd have you back next season. But they got wise to that, too, so after a while it didn't work."

"I later patterned myself after Gehrig in batting, fielding and everything else."

"Some white newspapers told us they would run the scores in their paper if we mailed the scores in to them every night. But sometimes we weren't near a mailbox, so that idea never worked out."

"We'd come north from Florida and stopped in New Orleans at the Patterson Hotel. We used to call it a chinch parlor. A chinch is what we called bedbugs. As soon as the light would go out there, the chinches would come out. We used to get newspapers and spread them on the bed and sleep on top of them. The bedbugs couldn't crawl up on the paper. Then we'd leave the lights on all night".

In the course of a year, the Grays played 200-210 games. "We'd play a semipro team, say, in " Rockville, MD and then a league game at Griffith Stadium at night. Or we'd play semipro teams around Pittsburgh. We'd start around 6:30 and get in as many innings as we could before dark. The Grays would get $75-$100 a game. But weekends was when you were really expected to make enough money to pay off your players. These were the games you played in Forbes Field, Griffith Stadium or Yankee Stadium. They were called 'Getting-Out-of-the-Hole-Days'."

"We in the Negro Leagues felt like we were contributing something to baseball, too, when we were playing. We played with a round ball and we played with a round bat. And we wore baseball uniforms and ... we loved the game and we liked to play it. But we thought we should have and could have made the Major Leagues, and all of us would have desired to play in the Major Leagues because we felt and we knew that that was the greatest game".

"Buck Leonard was the equal of any first baseman who ever lived. If he'd gotten the chance to play in the Major Leagues, they might have called Lou Gehrig 'The White Buck Leonard'." - Monte Irvin

"You could put a fastball in a shotgun and you couldn't shoot it by him." - Dave Barnhill

While barnstorming with Leonard, Roy Campanella noted, "If Leonard batted fourth, behind Gibson, we could pitch around him and make him hit an outside pitch. He had a real quick bat, and you couldn't get a fastball by him. He was strictly a pull hitter with tremendous power."

"I was talking about Robinson, Campy and Newk making it with Brooklyn. I'll never forget Buck's eyes filling with tears when he said, 'But it's too late for me'." -- Elwood Parsons, Dodgers scout

"Buck Leonard was as smooth a first baseman as I ever saw," reported Eastern booking agent Eddie Gottlieb. "In those days, the first baseman on a team in the Negro Leagues often played the clown. They had a funny way of catching the ball so the fans would laugh, but Leonard was strictly baseball: a great glove, a hell of a hitter, and he drove in runs."