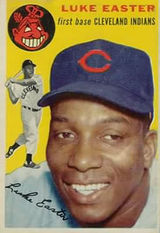 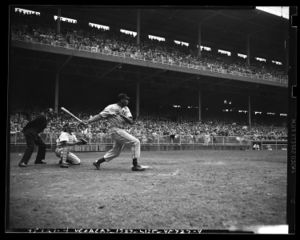 After playing in the Negro Leagues, first baseman Luke Easter played for several seasons with the Cleveland Indians. At age 41, after his major league career had ended, he joined the Buffalo Bisons of the International League. He was the Bisons' first black player in the 20th Century. In his first two seasons with the Bisons, Easter led the International League in home runs and runs batted in. His massive home runs and personality immediately endeared him to Buffalo fans.

Easter played in the minors for a full decade after he left the majors.

Easter coached the Rochester Red Wings from 1963 to 1965 and was a member of the Cleveland Indians coaching staff in 1969. He was shot and killed in a robbery in Euclid, Ohio in 1979.

Easter originally came up with the Indians two years after teammate and Hall of Famer Larry Doby broke the color barrier in the American League, although Doby was 8 years younger. In 2008, he was elected to the International League Hall of Fame.

He makes the "all holiday team" along with Steve Christmas.