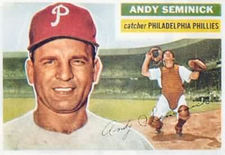 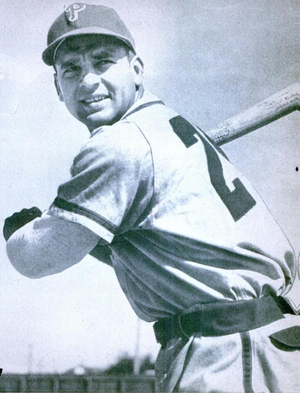 Andy Seminick spent 12 of his 15 NL seasons with Philadelphia. A solid receiver, he hit with power, and his .243 lifetime batting average belies his ability to get on base, as verified by his noteworthy career on-base percentage of nearly 35 percent.

He was first signed to a free agent contract at age 19 by the Pittsburg Pirates in 1940 and was sent to the class D Pennsylvania-Ontario-New York League London Pirates for his first professional game. He made only 19 appearances and was released by the Pirates before the 1941 season.

The Brooklyn Dodgers signed him next and he landed in the class D Appalachian League with the Elizabethton Betsy Red Sox, where he played 112 games and hit .263 in 1941. In 1942 he was with the same team and improved his hitting to a .325 average.

The Southern Association Knoxville Smokies signed Andy for the 1943 season where he hit .303 and was purchased in September by the National League Philadelphia Blue Jays. He got into 22 games but managed only a .181 batting average. This caused him to be optioned to the International League Buffalo Bisons for most of the 1944 year, being recalled to the Philadelphia major league team for the last few games of the season.

Thereafter, Seminick was a fixture in the National League, playing 12 seasons with Philadelphia and also 3 with the Cincinnati Reds team, through the 1957 season.