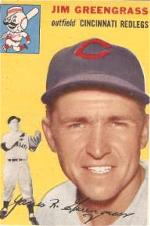 Jim Greengrass was signed as an amateur free agent by the New York Yankees before the 1944 season as a 16-year-old outfielder. He spent two seasons (1944-1945) in the low minors before going into the United States Military for two years in 1946 and 1947. After the military duty was over, Jim worked his way up to the Newark Bears in 1949, but then was sent back to the lower minors to work on becoming a pitcher, but after losing five games, he was switched back to the outfield.

In 1951 Jim had his best season yet, for the Muskegon Reds of the Central League, hitting for a league-leading .379 average with 18 home runs. In 1952, for the Beaumont Roughnecks of the Texas League, he hit .276 with 22 home runs and on August 28th, he was traded by the Yankees, along with Bob Marquis, Ernie Nevel, Johnny Schmitz and $35,000, to the Cincinnati Reds for Ewell Blackwell. Jim spent the rest of the year with the Reds, and his first major league hit was a grand slam home run that beat the Brooklyn Dodgers 4-0.

In his first full year in 1953, he hit .285 with 20 homers and an even 100 RBIs. Undaunted by the so-called sophomore jinx, he started out the 1954 campaign with a record four doubles on Opening Day and finished the year with 27 home runs and 95 RBIs. But he never fully recovered from a late-season ankle injury that year, and was traded to the Philadelphia Phillies in 1955, and was gone just a year later with a major league career .269 batting average and 69 four-baggers.

Jim spent five more seasons in the high minors, hitting .283 with 20 homers for the Sacramento Solons of the Pacific Coast League in 1957 and .274 with 27 four-baggers for the Portland Beavers in 1959. He finished up his 16 active seasons in pro baseball in 1961, hitting .252 for the Jacksonville Jets of the South Atlantic League.

After baseball Jim resided in Chatsworth, GA, and was a Cobb County deputy sheriff.