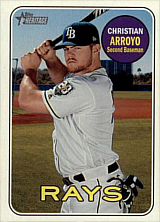 Infielder Christian Arroyo was selected by the San Francisco Giants and scout Mike Metcalf in the first round of the 2013 amateur draft. He signed for a bonus of nearly $1.9 million and made his pro debut for the AZL Giants on June 28th, going 1-for-3 against the AZL Diamondbacks.

He was called up to San Francisco on April 24, 2017 and immediately inserted into the starting lineup at third base, going 0 for 4 against the Los Angeles Dodgers. He hit his first career home run April 26th, a two-run shot off Sergio Romo of the Dodgers in a 4-3 win, then, on April 28th, he hit a tie-breaking solo homer off Ryan Buchter of the San Diego Padres in the 8th inning, leading the Giants to another 4-3 win. Overall, he played 34 games for San Francisco, hitting .192 with 3 homers and 14 RBI. He missed time due to injury, and the Giants failed to receive much offensive production from anyone they tried at third base in a 98 loss disappointment. They decided to address that weakness on December 20th when they acquired veteran Evan Longoria from the Tampa Bay Rays. Arroyo headed the other way, alongside veteran outfielder Denard Span and prospects Matt Krook and Stephen Woods.

Arroyo started the 2018 campaign with the Triple A Durham Bulls, making his Rays debut on May 17th. His tenure in Tampa was brief; in parts of two seasons he batted .243/.322/.388 with 8 XBH in 116 plate appearances. Prior to the new, singular trading deadline of 2019, he and reliever Hunter Wood were dealt to the Cleveland Indians in exchange for a minor league outfielder and international bonus slot money.

Arroyo was claimed off waivers by the Boston Red Sox on August 13, 2020. On August 20th, he was designated for assignment, without having made an appearance for Boston; he was sent outright to the team's alternate training site on August 23rd. On September 8th, Arroyo was selected back to Boston’s active roster; he made his first appearance for the Red Sox that day, against the Philadelphia Phillies. Overall in 2020, Arroyo batted .240 with 3 home runs and 8 RBIs in 14 games.