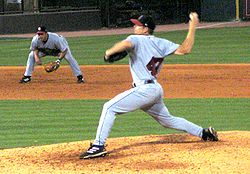 Pitcher John Wasdin won 39 games over parts of a dozen years in the majors.

Originally selected by the New York Yankees in the 41st round of the 1990 amateur draft, Wasdin did not sign and instead attended Florida State University. He was then chosen by the Oakland Athletics in the first round of the 1993 amateur draft with the 25th overall selection. He reached the majors with the A's in 1995 and played parts of two summers with them before being dealt to the Boston Red Sox for Jose Canseco prior to the 1997 season. With the Red Sox, he had his finest big league season in 1999, going 8-3 with a 4.12 ERA in 45 relief appearances.

Following stints with the Colorado Rockies and Baltimore Orioles, Wasdin played in Japan in 2002. After a year overseas, he signed with the Pittsburgh Pirates organization for 2003 and started the year off with a bang, pitching a perfect game for the Nashville Sounds against the Albuquerque Isotopes on April 7th. However, in June of that year, he was traded to the Toronto Blue Jays for Rich Thompson.

Wasdin played for the Texas Rangers from 2004 to 2006 before rejoining the Pirates in 2007. Through early July, he had a 5.95 ERA and a .381 opponent average, and when Salomon Torres came off the Disabled List, he was designated for assignment. He spent 2008 in the minors in the St. Louis Cardinals system and returned to Japan in 2009, going 2-3 with a 5.31 ERA in 14 outings for the Seibu Lions.

Because of his propensity to give up home runs, and because Red Sox radio announcer Jerry Trupiano would say "way back, way back" during his home run call, Wasdin gained the immortal nickname John "Way Back!" Wasdin.

After his playing days ended, Wasdin was the coach at University Christian School (Jacksonville) in 2010 and was then the pitching coach of the Vermont Lake Monsters in 2011, Burlington Bees in 2012, Beloit Snappers in 2013, Stockton Ports in 2014 and Midland RockHounds in 2015-2016. Wasdin moved into a front office role in 2017, working as the minor league pitching coordinator for the Baltimore Orioles. In 2019, he was named the Orioles' bullpen coach, his first major league coaching assignment, but stayed only one season.