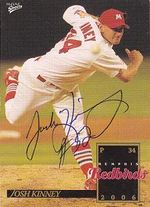 Josh Kinney was undrafted out of both high school and college. His high school did not offer baseball, so he pitched for another school. In college, he went 19-7 for a Division II school, Quincy University.

Up until June 27, 2009, when Kinney was the winning pitcher for St. Louis against the Minnesota Twins, he had the notoriety of being the sole remaining pitcher to have won a postseason game without having ever recorded a single regular season win. Odalis Perez, Francisco Rodriguez and David Price also had their first win in the postseason, but all three won a game in the following regular season; it took Kinney more than two years after posting a win in the 2006 NLCS against the New York Mets.