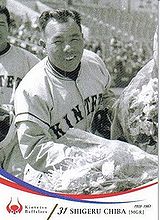 Shigeru Chiba was the star second baseman for the Yomiuri Giants in the early days of the club. He led the league four times in walks and made seven Best Nine selections, a record for second basemen that has been tied by Morimichi Takagi but not broken. This is even more remarkable as the Best Nine was not awarded for four seasons early in Chiba's career; had it been, he could well be the undisputed all-time leader. He later managed the Kintetsu club, which got its name Kintetsu Buffalo name from him. The name remains in use today as the Orix Buffaloes. Chiba was inducted into the Japanese Baseball Hall of Fame in 1980.

Chiba was on national tournament winners in both elementary high school and high school (the 1935 summer Koshien). He debuted professionally in 1938. The teenager batted .295/.329/.443 in the spring season. As a rookie, he was 10th in average and led the Japanese Professional Baseball League in triples (7). In the fall campaign, he hit .225/.409/.310 and drew a league-leading 43 walks.

Chiba then entered the military and served during World War II.

Chiba produced at a .290/.428/.375 line in 1950, stole 16 bases in 20 tries and scored 96 times. He led the new Central League with 105 walks and joined Fujio Fujimura as the first players in Nippon Pro Baseball history to draw 100 walks in a season. Shigeru was known for his tenacity in fouling off pitches to keep a plate appearance alive to force a walk. He later taught Wally Yonamine how to foul off pitches intentionally. Yonamine later commented that he and Chiba would sometimes make the opposing hurler waste 25 pitches to start the game.

The diminutive star was picked for the first NPB All-Star Game as he had another fine year in 1951. He batted .275/.380/.361, stole a career-high 22 bases (caught 7 times) and scored 86 runs. He led the CL with 76 bases on balls, his third time leading in walks. Chiba hit .412/.524/.647 in the 1951 Japan Series to help Yomiuri to their first title. He took the team's young players to a nightclub following the win and helped provide encouragement to Wally Yonamine, who had been the first American to play in Japan after World War II. He became one of Yonamine's best friends afterwards.

In 1952, the 33-year-old hit .312/.412/.444 with 87 runs. An All-Star again, he led the CL with another 76-walk season. He was 6th in the league in average and his 24 sacrifice hits were the most in the circuit. Manager Shigeru Mizuhara played a small-ball style and often asked #2 batter Chiba to bunt if leadoff hitter Yonamine reached base. Chiba said that he would have preferred to swing away and pull hit-and-runs as well, saying "Bunt! Bunt! Why? Why?" In the 1952 Japan Series, he hit .286/.400/.333 as the Giants claimed another crown.

The 35-year-old finally missed a Best Nine in 1954 as Jun Hakota made it instead. Chiba batted .252/.331/.344; the fine-fielding second baseman still made the All-Star team. Yomiuri failed to take a pennant for the first time in four years.

Chiba wore number 3 in his career and the number was passed on to future superstar Shigeo Nagashima when Shigeru retired.

Chiba managed in the minors for Yomiuri for a spell and worked as a broadcaster as well. In 1985, Shigeru was one of the few ex-Giants to criticize the Yomiuri's pitching around Randy Bass so that Bass, an American, could not break Sadaharu Oh's home run record.

Overall, Chiba had hit .284/.384/.388 in his career, with 913 walks and 981 runs in 1,512 games. He hit 96 home runs, 81 of them to the opposite field. His tendency to hit the ball to right caused teams to employ an outfield shift towards that direction. Once, Noboru Aota asked Chiba why he didn't hit to left now and then and bet 500 yen against him. Shigeru followed with a double to left in his next at-bat, complaining all the while. Aoto said he was trying to help his case to win the RBI title and batting behind Chiba, he got an additional opportunity, which would give him a raise to compensate for the loss of the 500 yen.

Chiba is remembered as a "nice guy" popular with younger players by Hirofumi Naito, who remarked as well on Shigeru's all-out style of play. Dick Kashiwaeda and Yonamine also offered similar impressions of support from the veteran. Glenn Mickens recalls as Chiba as having a wonderful sense of humor. Mickens said that Chiba always looked like he was sleeping when managing and others replied to him that Shigeru had looked the same way while playing.

Chiba is credited with inventing katsukare, a dish of rice, curry and pork. As per Gary Garland, the story goes that he was in a favorite restaurant one day and thought that the curry rice needed something. So he asked the manager to bring him curry rice with pork strips on it. It then became a regular offering for the shop and the dish spread nationwide in popularity.

This biographical article is missing the person's: death place
Retrieved from "https://www.baseball-reference.com/bpv/index.php?title=Shigeru_Chiba&oldid=888332"
Categories: