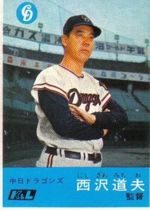 Michio Nishizawa was a star player in Nippon Professional Baseball. A five-time All-Star and three-time Best Nine selection, he is a member of the Japanese Baseball Hall of Fame. A two-way threat, Nishizawa started his career as a hurler before becoming an accomplished slugger in the second decade of his career. Additionally, he managed the Chunichi Dragons for a spell.

In 1942, Nishizawa had two remarkable games. On May 24th of that year, Nishizama pitched a remarkable twenty-eight complete innings, totaling 311 pitches in a 4-4 tie against Taiyo at Korakuen Stadium. Later that year, he tossed his first and only no-hitter, accomplishing the feat against the Hankyu team. Overall, he was just 9-11 on the season (the rest of his team was 27-49 though) and his 1.75 ERA missed the league's top 10. He led the league with 7 hit batsmen. He fell to 5-6, 1.87 in 1943, issuing 102 walks in 159 innings. Despite being a sub-Mendoza Line hitter for his career, Nishizawa was converted to first base that year and hit .223/.259/.243, seeing partial action in the field. He would go on to stardom as a feared hitter.

At age 31, Nishizawa batted .325/.381/.545 with 22 HR and 81 RBI. He was third in the league in average behind Tetsuharu Kawakami and Masayasu Kaneda. He led the CL in slugging, but lost out the Best Nine slot to Kawakami. He made his third straight All-Star team.

Michio returned to Chunichi as manager in 1964, replacing Kiyoshi Sugiura about halfway into the year. The Dragons went 36-49 under Nishizawa and finished last overall. In 1965, they improved to 77-59-4, second to the Giants, now in their greatest dynasty under Sadaharu Oh and Shigeo Nagashima. The 1966 Dragons were again second only to the "V-9" Giants with a 76-54-2 record. In Nishizawa's last year at the helm, they were second for the third straight year at 72-58-4; Nishizawa missed some time in May and they were 64-56-4 under his watch.

The Dragons compiled a 253-217-10 record in Nishizawa's four seasons at the helm.

He became one of Japan's most beloved athletes, and was elected to the Japanese Baseball Hall of Fame in 1977 despite the lackluster state of the Chunichi Dragons throughout much of his career.

This biographical article is missing the person's: death place
Retrieved from "https://www.baseball-reference.com/bpv/index.php?title=Michio_Nishizawa&oldid=755062"
Categories: