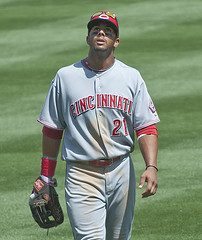 A cousin of former NFL star Eric Dickerson, outfielder Chris Dickerson was selected by the Cincinnati Reds in the 16th round of the 2003 amateur draft. He was signed by scout Keith Chapman and made his pro debut that summer with the Billings Mustangs, hitting .244 with 6 home runs and 38 RBIs in 58 games. He spent most of the next year with the Dayton Dragons, where he hit .303 with 4 homers, 34 RBIs, and 27 stolen bases in 84 games and made the Midwest League All-Star team. Late in the season, he was promoted to the Potomac Cannons and batted .200 with 5 RBI and 3 steals in 15 games. With the Sarasota Reds in 2005, he hit .236 with 11 homers, 43 RBIs, and 19 stolen bases and was named the Florida State League All-Star Game MVP after hitting a 2-run home run in the game.

Dickerson spent the entire 2006 campaign with the AA Chattanooga Lookouts, hitting .242 with 12 homers in 115 games. He began the next summer back with Chattanooga and got 5 hits on Opening Day. After hitting .272 with 7 steals in 30 games for the Lookouts, he was promoted to the Louisville Bats, where he hit .260 with 13 home runs and 23 steals in 104 appearances.

On August 12, 2008, Dickerson was called up to the Majors by Cincinnati. He made his debut the same day, going 1 for 4 with a double at Pittsburgh, then in his next start two days later, hit two doubles and a triple in 5 at-bats. He played 31 games that first season, hitting .304 with 6 homers and 16 RBI. 2009 then was his busiest season at the major league level, as he played 97 games, hitting .275 with 2 homers and 15 RBI. His lack of power was a disappointment, and in 2010, played only 20 games for the Reds, because of injuries, hitting only .205. With the team headed for the postseason but needing help in the outfield, hen was traded to the Milwaukee Brewers on August 9th, in return for veteran Jim Edmonds. He played another 25 games for the Brewers, but the results were similar, with a .208 average in 53 at-bats.

Dickerson did not figure in the Brewers' long-term plans, and at the end of spring training in 2011, they traded him to the New York Yankees in return for P Sergio Mitre. He had a chance to become the Yankees' fourth outfielder, but suffered an injury in his first spring training game, setting him back. He played 57 games for the AAA Scranton/Wilkes-Barre Yankees, hitting .241 with little power. He did get into 60 games for the Yankees as a back-up outfielder, but only went to bat 50 times, with a .260 average. He scored a run in his only appearance in the post-season, when the Yankees lost in 5 games to the Detroit Tigers in the ALDS. In 2012, he spent most of the season in AAA, being recalled to New York when rosters expanded on September 1st. With Scranton/Wilkes-Barre, he hit .316 with 24 doubles and 7 homers, his first really productive season since 2008. He started a game in place of injured centerfielder Curtis Granderson on September 2nd and hit a two-run homer off the Baltimore Orioles' Chris Tillman in his first at-bat of the season.

Dickerson is also noted for his environmental advocacy. With the Orioles, he would bicycle to the ballpark each game. In the minors with Louisville, he helped the team to stop its use of plastic water bottles, getting the club reusable aluminum bottles to cut down on waste. Along with Jack Cassel, he is co-founder of the non-profit organization "Players for the Planet".