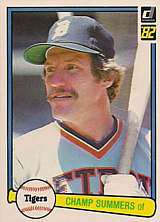 " . . . we were trying to leave Tiger Stadium after losing the World Series. Rioting fans shook our bus until I came out the door and stopped them because they knew who I was from having had a few good years with the Tigers. It was scary." - Champ Summers

Champ Summers, who started in professional ball at age 25, bounced from the Oakland Athletics to the Chicago Cubs to the Cincinnati Reds before finally establishing himself in the majors with the Detroit Tigers at age 32. In 1979, he hit 20 home runs in 90 games with the Tigers after being traded from the Reds, and the next year he hit 17 while primarily playing designated hitter.

According to a 2003 Chicago Sun Times article, Summers was discovered playing men's softball after having served in Vietnam during the Tet Offensive. His father was a Navy prizefighter and a railroad worker, while his mother was a professional bowler and a waitress. Growing up in Belleville, Illinois, he was already an excellent athlete, and Gloria Connors, the mother and coach of a young Jimmy Connors, asked him to play tennis against her son so he could play against an older and tougher opponent; it was Summers who had trouble keeping up against Connors, who was six years younger. Summers enrolled in Francis T. Nicholls State College where he played two years of basketball. He got into a fight with a teammate and was kicked off the team. No longer in school, he was drafted into the Army and spent two years in Vietnam. He then enrolled at SIUE, where he played two more years of basketball. He did not try out for baseball until his senior year. When he was looking for his first baseball contract, Summers said that the St. Louis Cardinals didn't want to sign him because he was 25. He was signed by scout George Bradley for the Oakland A's for $500.

His last major league appearance was in the 1984 World Series with the San Diego Padres. In 1989, Summers played for the Fort Myers Sun Sox of the Senior Professional Baseball Association. He batted .292 in 10 games. He was also a big league coach with the New York Yankees in 1989 and 1990. Summers was also a coach for the Columbus Clippers in 1987-1989.

He moved to Ocala, FL in retirement and died there in 2012 at age 66 after a long bout with kidney cancer.