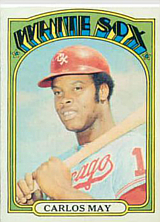 Brother of Lee May and uncle of Lee May Jr., Carlos May played 10 seasons in the major leagues and hit 90 home runs. Drafted in the first round of the 1966 amateur draft by the Chicago White Sox, he spent most of his career with the White Sox, but late in his career he was on the New York Yankees team that played in the 1976 World Series. He was on the White Sox during the tumultuous Dick Allen years, and had his best years when Allen was also playing quite well. He played over 1,000 games with the Pale Hose.

May lost his right thumb to a mortar accident while on Marine Reserve duty in August of 1969, but it did not stop his career. At the end of the 1969 season, he was named American League Rookie of the Year by the Sporting News (Lou Piniella won the official award) and was also named to the 1969 Topps All-Star Rookie Team. He went to the All-Star Game as well, after hitting .281 with 18 home runs and 62 RBI. He continued to play well over the following years, before slipping to a .249 average with 8 home runs in full-time play in 1974. He set personal highs with 20 home runs and 96 RBI in 1973. After his major league days, he played four years in Japan for the Nankai Hawks.

Carlos, who routinely wore #17, is possibly the only player to wear his birthday on his jersey - "May 17". There has developed a debate as to whether he had both May and 17 on his jersey at the same time. There does not seem to be photographic evidence at the moment.

After he retired from baseball, he took a job at the central Post Office building in downtown Chicago, IL and worked for many years for the Post Office. As of 2001, he was also a White Sox community relations representative and a hitting instructor for the Cook County Cheetahs.