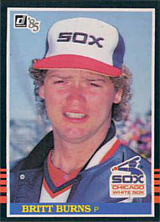 Britt Burns played parts of eight years in the majors with the Chicago White Sox. Injuries derailed his playing career well before he reached 30.

Following a high school career where he once struck out 18 in one game, Burns was selected by the White Sox in the third round of the 1978 amateur draft. He was called up by the team that August and made two big league starts as a 19 year old. Following more seasoning in the minors, he won 15 games and had a 2.84 ERA in his first full big league season in 1980 and was named Sporting News Rookie Pitcher of the Year.

After going 10-6 with a 2.64 ERA and throwing 30 consecutive scoreless innings in 1982, Burns appeared to be on track to be the ace of the Chicago pitching staff. His numbers declined somewhat over the next two seasons as he was plagued with injuries, but the Sox still won their division in 1983. He got the start in Game Four of that year's American League Championship Series against the Baltimore Orioles and pitched nine scoreless innings before giving up a home run to Tito Landrum in the top of the 10th inning to get the loss.

Burns struggled in 1984, winning only 4 games, accumulating an ERA of 5.00 and getting yanked from the Sox rotation. In 1985 he came back strong, winning 18 games. That offseason he was traded to the New York Yankees for Joe Cowley and Ron Hassey, upsetting White Sox fans. As fate would have it, he never played another game after developing a chronic hip condition and retired at the age of 26. He made two unsuccessful comeback attempts in the early 1990s.

In recent years, Burns has held the following positions (all are as Pitching Coach unless otherwise noted):

Since 1920, only three pitchers have had at least 18 wins in their final season: Britt Burns, Mike Mussina, and Sandy Koufax.