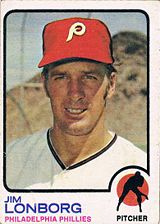 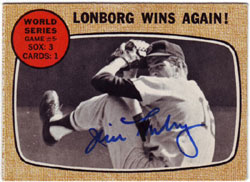 In high school, he was a teammate of Mel Queen, who ended up marrying his sister. After receiving a biology degree from Stanford University, where his teammates included fellow future big leaguer Darrell Sutherland, Lonborg signed with the Red Sox. He spent one year in the minors, posting an 11-9 record between two clubs before joining the Red Sox rotation in 1965. After two unspectacular years with Boston, he became the club's ace in 1967, tying Earl Wilson for the American League lead with 22 wins and pacing the circuit with 246 strikeouts en route to the Cy Young Award. In the World Series against the St. Louis Cardinals that October, he made three starts, earning complete game wins in Game 2 and 5 before taking the loss in the deciding seventh game.

Following the 1967 season, Lonborg injured his knee in a skiing accident, and he missed a portion of the 1968 season. He struggled over the next four years with the Red Sox, finishing close to the .500 mark with ERAs near 4.00. After the 1971 campaign, he was traded to the Milwaukee Brewers as part of a ten-player swap. Lonborg won 14 games with the Brewers in 1972 before being dealt to the Philadelphia Phillies after the season.

A key member of the Phillies rotation for the next several years, he went on to record 18 victories for the club in 1976 as the team captured the NL East title. Despite being slowed by an arm injury the next summer, 1977, he still went 11-4 as the Phillies repeated as division champs. He struggled further with injuries in 1978 and retired after playing in just four games in 1979.

In an unusual post-career decision, Lonborg decided to go to Tufts Dental School and got his degree. He retired from his dentistry practice in 2017. He was selected to the Boston Red Sox Hall of Fame in 2002.

On the classic sitcom Cheers, the picture behind the bar that was supposed to be Sam Malone pitching for the Red Sox was actually a picture of Lonborg.