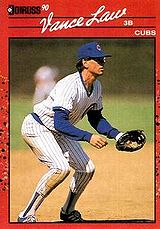 Vance Law had a fourteen-year professional career, with ten of those years in the major leagues, mostly as a second baseman and third baseman. He was a regular on the 1983 Chicago White Sox who won the division, as well as the 1989 Chicago Cubs who also won a division title. He started all four games of the 1983 ALCS, but the Cubs went with Luis Salazar in the 1989 NLCS as their starting third baseman.

Law played in Japan for the Chunichi Dragons in 1990, before coming back to play one more season in the majors.

He pitched at the end of 7 blowouts in his career, for a total of 8 innings , giving up 9 hits, 4 runs (3 earned), walking 3 and striking out 2; he did not give up a home run. His career ERA was 3.38. He looked like a real pitcher on the mound and could probably have had a decent pitching career had things turned out differently.

Law was at the helm of Brigham Young University's baseball team in Provo, UT in 2000-2012. He was the 2001 Mountain West Conference Coach of the Year. Prior to BYU, Law was the coach at his alma mater, Provo High School in 1995-1999, and an assistant coach at Utah Valley State College in 1993-1994. He returned to the White Sox as special assistant to player development in 2013 [1].

Vance Law is the son of Vern Law. Willie Stargell and Manny Sanguillen played with both Vern and Vance Law. His mother's name is VaNita, and his brothers' names are Veldon, Veryl, Vaughn, and Varlin; his sister's name is Valynda.

Law's son Adam Law was selected by the Los Angeles Dodgers in the 2013 amateur draft.