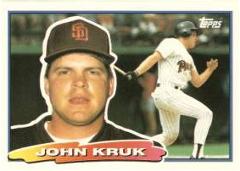 John Kruk played 10 seasons in the majors, hitting .300 with a 133 OPS+. He was a three-time All-Star who twice finished in the top five in the National League in batting average and had a .500 OBP in the 1993 World Series.

John was signed as a 3rd round pick (secondary phase) in the 1981 amateur draft by the San Diego Padres and scout Hank Zacharias. He was successful during seven total seasons in the minors, hitting .325 during that time. He even pitched five innings in the minors in 1983, giving up no runs.

He came up to the majors originally with the Padres in 1986 at age 25. After a little more than three seasons with the Padres, he was traded to the Philadelphia Phillies, where he spent 5 1/2 years.

Kruk led the Phillies in HR, RBI, hits and runs during the 1991 season.

Kruk is # 72 on the all-time list for on-base percentage. He made a memorable appearance in the 1993 All-Star Game. A Randy Johnson pitch sailed high and inside (over his head). Kruk's reaction was to obviously breathe a sigh of relief that the fastball didn't hit him in the head. He subsequently struck out.

He retired on July 30, 1995 by telling his manager with the Chicago White Sox if he got a hit he was retiring. Playing DH, he singled in the 1st inning and was lifted for a pinch hitter in the 3rd, never to play again. He finished his career with a .300 batting average on the dot.

He appeared in the 1996 movie The Fan as "Lanz." He is a commentator on ESPN.

As of 2019, Kruk owns a chain of restaurants in Florida called "Kruk's Philly Steaks".

John Kruk was a good ballplayer and also a funny guy. Here are some of his quotes:

"Lady, I'm not an athlete. I'm a professional baseball player."

"I would think I drive most hitting coaches crazy. During one single at-bat I used six different stances on six pitches. Oh yeah, I also struck out. So what do I know?"