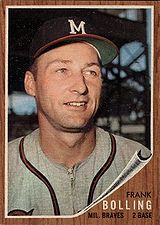 "Tom Meany in the May 1961 edition of Sport Magazine recalled that Harry Craft had once invited a group of reporters to name the five most talented players in the American League. The reporters suggested Mantle and Kaline. 'If you're through,' Craft said when they were, 'I've got my man, Frank Bolling, the Tigers second baseman. He's magnificent. He can become one of the big men in the game." - from the Bill James Historical Baseball Abstract

Frank Bolling was a steady second baseman for a dozen seasons in the majors from 1954 to 1966. He played his entire major league career with two teams, the Detroit Tigers and the Milwaukee/Atlanta Braves.

Frank first came up with the Tigers in 1954 after hitting .318 for the Buffalo Bisons in the International League. He spent 1955 in the military, returning a couple of months into the 1956 season and hitting a career high .281 in 102 games. He settled into the Motor City and won the inaugural AL Gold Glove for second basemen in 1958. That year, he briefly formed a double play combo with his brother, shortstop Milt Bolling. Their uncle, Jack, hit .313 in 125 games as a first baseman with the Phillies and the Dodgers.

Frank was involved in a six-player trade before the 1961 season, going to the Braves along with a prospect for Bill Bruton and three other players. Despite diminishing returns with his bat, he made his All-Star appearances the ensuing two seasons, playing in each of the games played in 1961 and 1962. His final full-time season was 1965 and he wrapped his career with limited duty in Atlanta the following year.

After he retired, Bolling, a 1953 graduate of Spring Hill College, returned to his native Mobile, AL, where he got involved in charity work and started a baseball league for physically or mentally challenged youth, the Frank Bolling Adaptive Baseball League. This was the first league of its kind, and now there are a number of such leagues across the country.