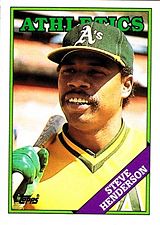 Steve Henderson played 12 seasons in the big leagues, posting a career batting average of .280. He hit as high as .306 while a regular for the New York Mets, as high as .293 as a regular for the Chicago Cubs, as high as .294 while a regular for the Seattle Mariners and as high as .301 while a frequently-used back-up for the Oakland Athletics. He was the key player acquired by the Mets in the infamous trade that sent Hall of Famer Tom Seaver to the Cincinnati Reds in 1977. He reached base in 29 straight starts, a Mets rookie record that Josh Satin tied 36 years later. In spite of spending the first two and a half months of the season in the minors, he made a run at the 1977 National League Rookie of the Year Award, finishing behind Andre Dawson; he hit .297 with 16 doubles and 12 homers in 99 games that year and was expected to blossom into a huge star. However, he settled into being merely a good player, as his lack of power kept him from becoming an All-Star.

Henderson became a player-coach with the Pittsburgh Pirates' affiliate the Buffalo Bisons in 1990 and remained a coach in the system for three more years before becoming a Houston Astros coach for three seasons (1994-1996).

Henderson joined the expansion Tampa Bay Devil Rays organization and spent 8 years as the minor league hitting coordinator (1997 and 1999-2005). He was the D-Rays hitting coach in 1998 and returned to that position from 2006 through 2009.

He made one observer's All Steve Team.