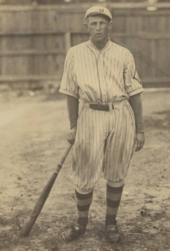 Stuffy Stewart played shortstop at Southwestern Presbyterian College (now Austin Peay State University) in Clarksville, Tennessee, in 1914. He started his pro career in 1915 at age 21 in the FLAG League and led the league with 38 steals in 71 games. He played in the SALLY League in 1916 before finishing the season with the St. Louis Cardinals. He played with them again for the first two months of the 1917 campaign, but finished the season with the Denver Bears of the Western League. Stewart served in the military in 1917 and 1918 as nurse at Camp Jackson in South Carolina and was shipped overseas just as World War I ended.

In January 1919, he was traded by the Cards to the Philadelphia Phillies. That year, he played in the Florida State League, leading the circuit in steals with 57 in 68 games. He played for the Birmingham Barons in the Southern League from 1920 to 1925, leading the league in steals 4 times. During that time, he got trials in the majors with the Pittsburgh Pirates and Brooklyn Dodgers. Additionally, Stewart managed Birmingham in 1923 and 1924. In September 1925, he moved on to the Washington Senators as the Senators sent three players to Birmingham for him and another player. He spent the next two years with Washington and mainly ran and subbed for second baseman Bucky Harris.

Stewart returned to Birmingham after the 1927 season at his request, but a year later, the Senators repurchased him after he led the Southern Association in steals and runs. He was traded to the Baltimore Orioles of the International League late in the 1929 season. He played in the IL again in 1930, and in 1931, he was sold to the Seattle Indians of the Pacific Coast League, who sent him to the Knoxville Smokies late in the year. Stewart finished his career in the Texas League in 1932.

Away from the diamond, Stewart was a golf pro in the offseason. Athletics apparently ran in his genes, as his son, John Stewart Jr., was a swimming champ.