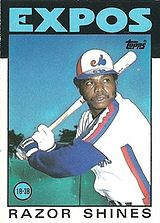 With perhaps one of the most unique names in baseball history, and despite having played in only a few games in the majors, the star-struck Razor Shines (who was trying to catch on with the Pittsburgh Pirates during spring training in 1990) was asked what it's like playing in the Major Leagues -- to which he loudly and enthusiastically replied with a broad smile: "My mama's so proud of me. I'm a Major Leaguer!"

His entire major league career was with the Montreal Expos. He saw most of his action with the team in 1985, when he played 47 games, mainly as a pinch-hitter, but hit only .120 with no extra-base hits. He did pitch one scoreless inning in a blowout loss that year, however. He was a jack-of-all-trades on the field, as he was drafted as a catcher and caught some games in the middle of his minor league career. He made his debut in 1983 as an outfielder, played mostly first base in the majors, and also saw time at third base. He was a great hitter in the minors, especially during his numerous seasons with the Indianapolis Indians, but played only sporadically in the majors and was unable to land a regular job.

In 1990, Shines played for the Sun City Rays of the Senior Professional Baseball Association. He played in 10 games and was batting .270 with 2 home runs and 12 RBI when the league folded.

Shines was a coach for Indianapolis in 1993. After managing in the minors for several seasons, Shines was named Chicago White Sox third base coach for the 2007 season. He was let go after the season and became skipper of the Clearwater Threshers in the Philadelphia Phillies organizations. In 2009, he became the third base coach of the New York Mets through 2010. In 2012, then became the hitting coach for the Great Lakes Loons.