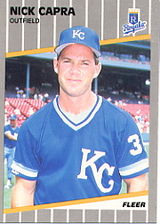 Outfielder Nick Capra played 17 seasons of pro baseball (15 at the AAA level) and had several cups of coffee in the majors. Since his playing days, he has been a minor league manager and coach and has worked in the Chicago White Sox front office.

Following high school, Capra was selected by the Montreal Expos in the 12th round of the 1976 amateur draft, but he did not sign, opting for college instead. After attending Lamar Community College and the University of Oklahoma, he was taken by the Texas Rangers in the third round of the 1979 amateur draft and made his pro debut that summer with the Tulsa Drillers. He hit .281 with 9 home runs for the Denver Bears in 1982 to earn his first September call-up to the bigs. He made his big league debut against the Minnesota Twins on September 6th and then recorded his first major league hit, a home run, off Steve Baker of the Oakland Athletics on September 22nd. Overall, he hit .267 in 13 games that fall.

After brief stints in the majors with Texas in 1983 and 1985, Capra moved on to the Chicago White Sox organization in 1986. He then spent another summer in the Rangers chain before joining the Kansas City Royals system in 1988. He got into a career-best 13 games for the Royals that summer but hit just .138 with 3 runs scored. He spent the entire next year with the Omaha Royals, hitting .290 while leading the American Association with 84 runs scored.

Capra was back in the Texas chain in 1990 and got his last taste of big league ball in 1991, appearing in 2 games for the Rangers. He continued in the minors in the Cincinnati Reds, Philadelphia Phillies, and Florida Marlins chains through 1995. Overall, he hit .274 with 92 home runs and 515 stolen bases in 1888 minor league games.

Since retiring as a player, Capra served as a manager in the Chicago White Sox system. After leading the Bristol White Sox for three years, he managed the Burlington Bees in 1999. In 2000 and 2001, he led the Birmingham Barons, and he moved up to AAA in 2002 with the Charlotte Knights.

In 2005, Capra returned to A ball with the Kannapolis Intimidators. After a stint as White Sox minor league hitting coordinator, he then moved up to Minor League Field Coordinator, a job he held until 2011. He was promoted to Director of Player Development in 2012. In 2017, he moved back to the field as third base coach for the White Sox under new manager Rick Renteria. He was listed as the signing scout for Justin Jirschele as well.