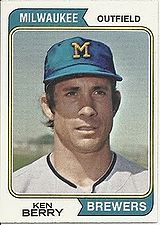 Ken Berry was a very good defensive center fielder, known especially for leaping above the outfield wall to rob opposing hitters. He also had a strong and accurate arm. In 1966 and 1967, the Chicago White Sox had probably the two best defensive center fielders in all of baseball in their lineup, between Berry and Tommie Agee. Berry played the outfield corners while Agee was in center field and went back to center after Agee was traded to the New York Mets before the 1968 season. An All-Star in 1967, Berry won two Gold Gloves and finished his career with a .255 average and 1,053 hits in 14 seasons.

Ken had a minor part in the 1988 movie Eight Men Out and served as a baseball consultant on the set. His son, Layne "Boomer" Berry, played minor league ball from 2004-2009.