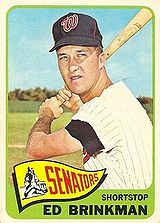 A slick-fielding shortstop who covered a lot of ground, Ed Brinkman survived 15 big league seasons despite a rough slash line of .224/.280/.300 in 1,845 games. Acquired from Washington with fellow defensive wizard Aurelio Rodriguez in 1971 for the fabled and troubled Denny McLain, Brinkman and Rodriguez made the left side of Detroit's infield almost airtight but offensively inept. Ed enjoyed one All-Star campaign in his time in the Motor City with the 1973 squad and improbably slugged 14 of his career 60 home runs during 1974, his age 32 season, finishing with a personal best .347 slugging percentage. Ed's main teammates were Frank Howard, Mickey Lolich, Ken McMullen, Bill Freehan, Mike Epstein and Norm Cash.

Brinkman died in 2008 due to complications from heart failure at the age of 66. He was the brother of catcher Chuck Brinkman.