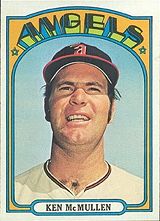 Ken McMullen had a sixteen-year career in the majors. Despite being overshadowed by contemporary Brooks Robinson, he was regarded one of the better-fielding third basemen of his era, and he showed moderate power at the plate. Mickey Mantle once called him the most underrated player in the American League. 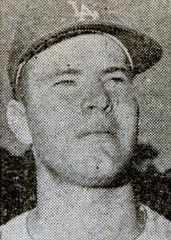 McMullen was signed by the Los Angeles Dodgers for a reported $60,000 bonus in 1960 and hit .288 with 21 home runs for the Reno Silver Sox the next year while leading the California League with 107 walks. He split the next three summers between the minors and the Dodgers but put up disappointing numbers at the big league level. Following the 1964 campaign, he was dealt to the Washington Senators in a seven-player trade that sent Frank Howard to the nation's capital.

Upon his arrival in Washington, McMullen became the Senators' regular third baseman and hit 18 home runs in his first season with the club in 1965. In a September 26, 1966 contest against the Boston Red Sox, he set an AL record with 11 assists (a mark later tied by Mike Ferraro). In 1968, he clubbed 20 homers, and the following year, 1969, he recorded a career-high 87 RBI.

Early in the 1970 season, McMullen was traded to the California Angels for Rick Reichardt and Aurelio Rodriguez. He hit 21 home runs for the Angels in 1971. After the 1972 season, he was dealt back to the Dodgers as part of another seven-player trade. Over the next three years, he was primarily used as a pinch-hitter. Prior to the 1976 campaign, he was let go by Los Angeles and soon caught on with the Oakland Athletics, for whom he led the AL with 9 pinch hits that summer. He spent 1977, his final season, with the Milwaukee Brewers. In his final big league at-bat, on September 14th against the Seattle Mariners, he hit a two-run home run.