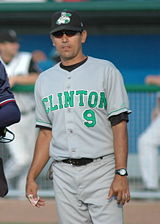 Subero was a coach for the GCL Rangers in 1999-2000 and managed the club the next two seasons. He then managed the Clinton LumberKings in 2003-2005. In 2006-2007, he was the manager of the Bakersfield Blaze of the California League. In 2008 Subero went to the Chicago White Sox organization as manager of the Birmingham Barons, reaching the playoffs led by a pitching staff that topped the league in ERA.

Moving to the Los Angeles Dodgers organization, Carlos has managed the Inland Empire 66ers in 2009 and Chattanooga Lookouts in 2010, 2011 and 2012. He clinched the second half title with Chattanooga in 2011 and 2012, also led by a pitching staff that topped the league in ERA in 2011, and second in ERA in 2012. He managed his 5th season in the Dodgers organization in 2013, managing their single A affiliate in the California League, the Rancho Cucamonga Quakes. In 2014, he moved to the Milwaukee Brewers organization and managed their AA affiliates in the Southern League that year and in 2015 before moving to the big league club as first base coach in 2016. He stayed until the end of the 2019 season.

He is also known as the youngest manager to ever win a Caribbean World Series at 33 years old (the record had been held by Manny Acta, who did it by managing the Tigres del Licey to a title when he was 34). Subero did it with Leones del Caracas from his home Venezuela in the 2006 Caribbean Series, after having won the Venezuelan League championship that same year. He is only one of two Venezuelan natives to manage a Caribbean Series winner, joining the popular "Chico" Carrasquel, very well known in the "Windy City".