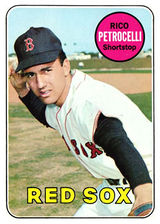 The Boston Red Sox signed Rico Petrocelli to an amateur free agent contract in 1961 and the 19-year-old played his first season of professional ball with the Class B Carolina League Winston-Salem Red Sox in 1962. The young shortstop appeared in 137 games, hit for a .277 batting average and also hit 17 home runs. He fielded at a .923 pace in his first year as a pro. The 1963 season found Rico with the Reading Red Sox of the Class AA Eastern League where he again appeared in 137 games, hitting at a .239 clip, with 19 round-trippers. Petrocelli showed improvement in the field, with a .946 percentage. He also appeared in one game with the major league Red Sox, getting one hit in four trips, but picked up his first fielding error in his 13 year major league career. In 1964, Rico spent his third and final minor league season with the Seattle Rainiers of the Triple A Pacific Coast League, appearing in 134 games, hitting .231 with 10 home runs and fielding at a .956 clip.

During his career, Rico played in two World Series, in 1967 against the St. Louis Cardinals (he belted two home runs), and in 1975 against the Cincinnati Reds, when he had 8 base hits in 28 at-bats for a .308 average.

Petrocelli retired after the 1976 season, his fifteenth year in professional baseball. He was known as one of the league's best fielders for over a decade and left a .970 career fielding percentage to his credit. Rico's major league batting statistics show that he appeared in 1,553 games, went to bat 5,390 times, collected 1,352 base hits, including 210 home runs, 773 RBI and a .251 batting average.

Petrocelli was inducted into the Boston Red Sox Hall of Fame in 1997.

After his retirement he worked as a minor league coach for several years, mostly for the White Sox organization. Petrocelli managed the 1986 Appleton Foxes, 1987-1988 Birmingham Barons and 1992 Pawtucket Red Sox.

Petrocelli currently lives in Southern New Hampshire with his wife, and has an office in Nashua, NH, where he runs his own business, working at baseball clinics and in radio, including a Saturday morning show on MLB Network Radio ("Remember When"), co-hosted with long-time broadcaster Ed Randall.