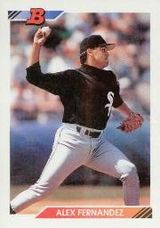 Hard throwing right-hander Alex Fernández won in double figures in each year from 1993 to 1997, captured a World Series ring with the Florida Marlins in 1997, and recorded 102 big league wins before his 30th birthday, but unfortunately his career was soon cut short by injuries.

As a teenager, Fernández was a third baseman/pitcher for the United States in the 1987 World Junior Championships. He hit .320/~.414/.480 while struggling on the mound (0-1, 6.23). After graduating from Monsignor Pace High School in Miami, FL, he was selected by the Milwaukee Brewers in the first round of the 1988 amateur draft but opted for college instead.

At the University of Miami in 1989, he threw a no-hitter against the University of Maine and was named Baseball America "Freshman of the Year" after going 15-2 with an 2.01 ERA and 177 strikeouts in 148 innings. To this day, he is the player with the most major league victories to come out of the school's top-notch baseball program. The next year, he transferred to Miami Dade College, where he was 12-2 with a 1.19 ERA. After that season, he was honored as National Junior College Player of the Year and won the Golden Spikes Award and the Dick Howser Trophy.

Fernández was selected by the Chicago White Sox with the fourth overall pick in the 1990 amateur draft. After going 5-1 in just eight starts in the minors (including a 17 strikeout performance for the Birmingham Barons), the 20-year-old made his big league debut on August 2nd against the Milwaukee Brewers, pitching 7 innings but getting a no-decision. Overall, he was 5-5 in 13 starts for the Sox that summer.

After going 9-13 in his first full big league season of 1991, Fernández threw a one-hitter against the Milwaukee Brewers on May 4, 1992, allowing just a 2nd-inning double to Dante Bichette. However, he struggled later that summer and was briefly sent down to the AAA Vancouver Canadians, where he posted a 0.94 ERA in 4 games before returning to the majors. He went on to record 18 wins, a 3.13 ERA, and 169 strikeouts with the Sox in 1993, as the team won the AL West title. In the American League Championship Series that October, he was the victim of poor run support, taking a pair of losses despite giving up only 3 earned runs over 15 innings. He was the anchor of the Sox rotation over the next three seasons, winning 16 games and striking out 200 in 1996

Following the 1996 campaign, Fernández became a free agent and signed a lucrative contract with his hometown team, the Florida Marlins. In just his second start for the club in 1997, he threw a one-hitter against the Chicago Cubs, giving up only a 9th-inning single to Dave Hansen. He won 17 games for the team that year but missed out on playing in the World Series after suffering a torn rotator cuff. He missed the entire next season but came back for the Marlins, going 11-12 in 32 starts in 1998 and 1999 before retiring.

Of all the pitchers drafted in the first round of the 1990 draft, only Mike Mussina has more wins than Fernández.

Fernández was known to throw a rising fastball, curve, slider, and change-up. Alex's son, Alex Fernandez Jr., was drafted by the Marlins as an infielder in 2015.