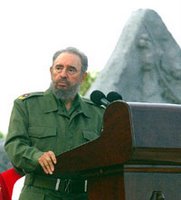 Fidel Castro was a Cuban political leader who had much involvement with baseball. His baseball involvement may be best known in the United States in connection with an article that ballplayer Don Hoak wrote called "The Day I Batted Against Castro".

Castro took over control of the Cuban government in 1959, replacing dictator Fulgencio Batista, after giving up his legal practice to start a guerilla warfare in order to fight the injustices perpetrated by the Batista regime. As a politician, his long rule had been marked by both harsh criticism and flowery praise as few even-handed presentations are provided of a period that marked both improvements and declines in Cuba.

Castro had been significantly involved in baseball, attending many games. In 1960, he outlawed professional sports, ending the Cuban Winter League and forcing the Havana Sugar Kings to move. Baseball has continued to thrive in Cuba under the Cuban Serie Nacional and Cuba remained a prominent force in international tournaments. It was often claimed in the US that such success came because they had veteran amateur players competing against college-aged players from elsewhere, but Cuba finished second in the 2006 World Baseball Classic when its amateurs competed against the top players from other nations. However, the team's performance has suffered from massive defections of its top baseball players starting in the 2000s.

A long-standing myth in America is that Castro tried out for either the New York Yankees or Washington Senators and failed to impress enough to sign a contract; while a fan of baseball, Castro was not a good enough player to warrant such a try-out and there is no record of his having played professionally. It is likely he pitched in intramural competition in college for the University of Havana law school, but he was not good enough to pitch on the college's varsity team. See this Universal newsreel for a short clip of Castro pitching in a charity game in Cuba in 1959.

Castro stepped down as head of the Cuban government in 2008 following a lengthy period of illness. He still had an effect on major league baseball in 2012 when Miami Marlins manager Ozzie Guillen was suspended after praising Castro's durability in a Time interview.