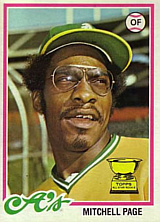 Mitchell Page played eight years in the major leagues, with a terrific rookie year in 1977 for the last-place Oakland Athletics when he slugged .521 and stole 42 bases. He was runner-up to Eddie Murray for the 1977 American League Rookie of the Year Award and could in fact have won the award: he beat Murray in OPS+, 154 to 123, and he stole 42 bases to Murray's zero. Page also established an American League record (since broken) with 26 stolen bases in a row between April 10th and August 13th. He had 15 RBI in his first 10 major league games; as of 2014, no one has since topped that run while only Mark Quinn matched it. He never had another season anywhere as good, however, as he set highs in every hitting category that he would never match in his seven other seasons in the majors.

After his playing career ended, Page was the hitting coach for the Tacoma Tigers in 1992-1994. He was the Kansas City Royals first base coach from 1995 to 1997 and was the hitting coach for the Memphis Redbirds in 1998. Page was the Cardinals' minor league hitting coordinator from 1999 to mid-2001 was a member of the St. Louis Cardinals coaching staff from mid-2001 to 2004. He joined the Washington Nationals as their hitting coach in 2006. Page began 2010 as coach of the Quad Cities River Bandits, but left in May due to "personal reasons" and was replaced by Joe Kruzel.

Mitchell played the role of "Abascal," an Angels player, in the 1994 movie Angels in the Outfield. His son, Kyle Page, played at Brevard Community College.