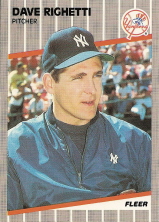 Although best known as a reliever, Dave Righetti began and ended his career as a starting pitcher. As a minor leaguer with the Tulsa Drillers, he set a Texas League record when he struck out 21 Midland Cubs batters on July 16, 1978. That is the league's record for a 9-inning outing (Bob Turley fanned 22 in a 16-inning effort in 1951). He made his major league debut with the New York Yankees in 1979 and won the 1981 American League Rookie of the Year Award. On July 4, 1983, he pitched a no-hitter against the Boston Red Sox.

In 1984, he was moved to the bullpen, and in 1986, he set a major league record (since broken) by recording 46 saves. After seven successful seasons as the Yankees' closer, he was signed as a free agent by the San Francisco Giants. He saved 24 games in 1991, but after that, his numbers tailed off. After stints with the Oakland Athletics and Toronto Blue Jays, he ended his career as a starter once again with the Chicago White Sox in 1995.

In 1999, he rejoined the Giants organization as a pitching instructor and was the club's pitching coach from 2000 to 2017, a span of 18 seasons that included three World Series titles. He was dismissed along with a number of other coaches following a dismal 2017 season that saw the team finish last, but was offered a job in the front office as a special assistant to General Manager Bobby Evans.