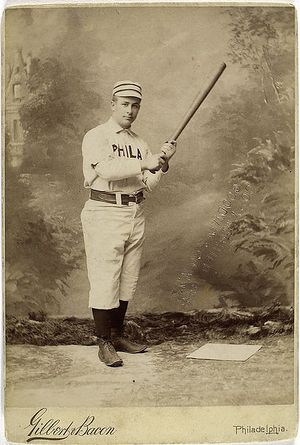 Jersey says Philadelphia even though he played for Brooklyn.

George Pinkney was a decent-hitting third baseman who played on Brooklyn pennant-winners in 1889 and 1890 (in two different leagues). His best year as a hitter was in 1890 when he hit .309 with 80 walks and scored 115 runs. He also stole 47 bases.

As a fielder his fielding percentage was above average. He led the league in walks in 1886 and runs scored in 1888.

The most similar player, Art Devlin, came up a few years after Pinkney had retired.

Pinkney started playing professionally with the Peoria Reds. In the majors, he played all the innings of 578 straight games, making him the "Iron Man" of his day. In total, he played 5,152 consecutive innings from September 21, 1885 until April 30, 1890. That was the longest such streak in baseball history until broken by Cal Ripken in 1985, on his way to setting his more famous consecutive games played mark. Pinkney died of bronchitis. He is in the Greater Peoria Sports Hall of Fame.