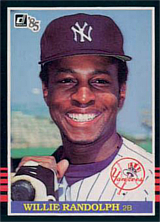 Second baseman Willie Randolph, the New York Yankees captain from 1986 to 1988, played eighteen seasons in the majors, getting over 8,000 at-bats and being named six times to the All-Star team. After over a decade as a Yankees coach, he went across town and became manager of the New York Mets for three and a half seasons.

Randolph was a seventh-round draft pick by the Pittsburgh Pirates in 1972, signed by scout Dutch Deutsch, and spent four years in the minors in their organization. In 1975, he hit .339 in 75 games with Charleston and got his first shot at the majors.

Randolph appeared in 30 games with the Pirates in 1975, making his debut shortly after he turned 21 years old. The Pirates won a division title and Willie appeared in two games of the NLCS. However, the club was happy with Rennie Stennett at second and Randolph was traded in the offseason to the Yankees along with Ken Brett and Dock Ellis in return for Doc Medich.

Randolph settled in immediately as the Yankees' regular second baseman, a role he held for thirteen seasons. He was a star from the get-go, being named to the All-Star team his first season in pinstripes, in 1976, and New York reached the World Series. Overall, he played in three World Series with the Yanks (he missed the 1978 World Series because of injury, giving Brian Doyle a chance to shine in his place). In 1980, he hit .294 with 119 walks and 30 stolen bases, while in 1987 he hit .305 with 82 walks. He was usually the Yankees' second hitter during those years, hitting behind very fast players such as Mickey Rivers, Dave Collins and Rickey Henderson.

As a free agent, Randolph signed with the Los Angeles Dodgers in 1989 and was their regular second baseman that year. The next May, he was traded to the Oakland Athletics and was their everyday second baseman for the remainder of the 1990 season, appearing in the 1990 World Series. A free agent again in 1991, he joined the Milwaukee Brewers and hit a career-high .327, which was third-best in the American League. A free agent once more, he spent his last season in the majors as a regular for the New York Mets in 1992, hitting a decent .252 (the team hit .235 as a whole). 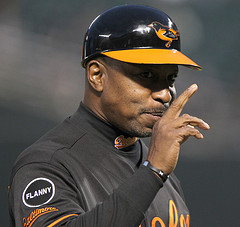 Following his playing days, Randolph was a member of the Yankees coaching staff from 1994 to 2004. In 2005, he moved across town and become manager of the Mets. The team had not finished higher than fourth in the previous three years, but Randolph took them to third in his first season at the helm. In 2006, he became a big favorite as the Mets won the division with 97 victories and swept the NLDS over the Dodgers. They then pushed the St. Louis Cardinals to a seventh game in the NLCS, but lost the decisive game on a late home run by catcher Yadier Molina. In 2007, Randolph took the team to a second-place finish, only one game away from the Philadelphia Phillies, who out-distanced the Mets on the last day of the season after trailing them all year and benefiting from a late-season swoon by the New Yorkers.

New York is a fickle town, and while Randolph had had three successful years with a win/loss record around .550, he lost his job when the team was 34-35 and in fourth place on June 17, 2008. The club had played over .500 in April but slipped under for May and June, and Randolph, along with pitching coach Rick Peterson and first base coach Tom Nieto, got the ax. His managerial winning percentage of .544 with the Mets puts him second-highest among Met managers. The Mets ended up winning 89 games on the season under Jerry Manuel, but they again fell tantalizingly short of the postseason.

After the 2008 season, Randolph interviewed for the job as skipper of the Brewers. Although he did not get it, he was hired as the club's bench coach for 2009 and 2010. In 2011, he was bench coach of the Baltimore Orioles. He was the third base coach for Team USA at the 2013 World Baseball Classic. On June 20, 2015 the Yankees dedicated a plaque to him in Monument Park.

Randolph's brother, Terry Randolph, was a defensive back in the NFL with the Green Bay Packers and his son Andre played professionally from 2003 to 2004.