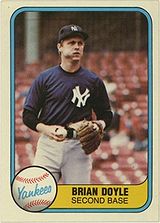 The brother of Denny Doyle and twin brother of Blake Doyle, Brian Doyle was famed for his heroics in the 1978 World Series as an injury replacement.

Like his twin, Brian was a 4th-round draft pick in the 1972 amateur draft. Brian was taken early in the round by the Texas Rangers while Blake was taken late in the round by the Baltimore Orioles. Brian debuted with the Geneva Senators and hit .256/~.392/.363 and led New York-Penn League shortstops with 20 double plays. On June 24, he was at short in the first game umpired by a woman, Bernice Gera. In the 4th inning, Doyle took a throw from 2B Jim Pascarella to seemingly retire Terry Ford on a line drive double play, but Gera called Ford safe before changing her call seconds later. Auburn Phillies manager Nolan Campbell came out to complain and got tossed from the game. It would be Gera's lone game as an umpire in Organized Baseball.

1977: Trade to the Yankees and Syracuse[edit]

Before the 1977 season, Brian was dealt with Greg Pryor and cash to the New York Yankees for Sandy Alomar Sr..

Doyle spent 1977 with the Syracuse Chiefs and hit .246/~.286/.335. While Brian was the main second baseman for Syracuse, twin brother Blake was the main second baseman for the Rochester Red Wings, giving the Doyle family one-quarter of the starting 2B jobs in the 1977 International League. Oddly enough, both twins wound up with identical .961 fielding percentages (actually, .9612 to .9608 in Blake's favor if you want to be picky).

1978: A memorable year, a practical joke, lots of flights[edit]

In 1978, the Doyle brothers were part of a practical joke that fooled the Yankee administration. When Brian's daughter was born, Blake came in to visit and Brian asked him to help stay with the family; at the time, Blake was in a cast after a home-plate collision. Roy White convinced Blake to dress up as Brian before a Yankees appearance on the Game of the Week. Doyle told trainer Gene Monahan that he had tripped and fell. Monahan took White and Blake to Billy Martin's office and Martin broke his bridge in shock. Martin then called in GM Al Rosen. Once all the Yankee brain trust was in a total state of worry, Brian stepped into the office to explain the situation.

Yankees 2B Willie Randolph pulled his hamstring on the next-to-last day of the 1978 campaign and missed the post-season. Brian hit .286/.375/.286 in the 1978 ALCS, working on hitting to the other field. He said that this convinced other teams to pitch inside, working to his strength. Doyle then led the 1978 World Series in average (.438/.438/.500) and scored four runs. In game five, he had three hits to put the Yankees ahead for good. He doubled in Graig Nettles to tie game six, for his first MLB extra-base hit. He scored, then later singled in Lou Piniella and finally made a fine play on a grounder by Vic Davalillo to conclude the festivities.

That winter, the Doyle brothers opened a baseball school in Winter Haven, FL that had been planned for a couple years; it was great timing and the school was still running strong 24 years later.

The Oakland Athletics selected Brian in the 1980 Rule V Draft after the season. He hit .125/.146/.125 for the 1981 Athletics, in 17 games. Overall, he had only managed a .161/.201/.191 line in 110 games in the major leagues. Doyle also played for the Tacoma Tigers, hitting .173/~.306/.212 in 21 contests. Oddly, he scored 10 runs with nine hits and an 0-for-3 performance running on the basepaths, thanks to nine walks. He pulled off a hidden ball trick on April 10 against the Minnesota Twins' Glenn Adams. Doyle also suffered a separated shoulder that year during a collision with Otto Velez at second base.