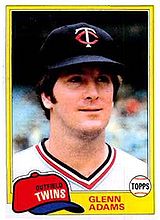 Glenn Adams saw time over eight big league seasons between 1975 and 1982. Originally property of the Houston Astros, he was released early in 1972, spending the whole season outside of organized baseball. The San Francisco Giants took a flier on him for 1973 and he reached the big leagues two seasons later, in 1975. His most productive big league time came during five seasons as a member of the Minnesota Twins, with whom he batted .338/.376/.468 in 95 games in 1977.

Following his playing days, Glenn managed the Kinston Indians, the Carolina League affiliate of the Cleveland Indians, in 1988. The team finished in first place with a record of 88-52 and won the league championship in the postseason playoff. He was then a minor league batting instructor and coach for the Minnesota Twins from 1989 to 1994. He coached the Iowa Cubs from 1995 to 2000. Adams was the minor league hitting coordinator for the Seattle Mariners from 2001 to 2006. After the 2006 season, he was named hitting coach of the Erie SeaWolves and held that position through the 2008 season.

As a player, he primarily wore number 8.