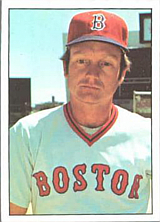 Denny Doyle was a slick-fielding second baseman who came up with the Philadelphia Phillies in 1970. Although he hit just .208 in his rookie year, Doyle developed into a fair major league hitter with a .250 lifetime average. He was platooned most of his career, with just 451 at-bats against left-handed pitching vs. 2,839 against right-handers. Doyle hit .208 versus southpaws as opposed to .257 versus right-handers.

In December 1973, Doyle was dealt to the California Angels in a complicated "player-to-be-named-later" deal that was essentially a swap of second basemen, with the Phillies having acquired Billy Grabarkewitz the previous August. He joined the Boston Red Sox midyear in 1975 and received five points in the 1975 AL MVP Award voting. He platooned at second base with Doug Griffin as the Red Sox went on to win the AL pennant.

Doyle featured prominently in one of the most famous Game 6s in MLB history, Game 6 of the 1975 World Series. With the score tied 6-6 between his Red Sox and the Cincinnati Reds in the bottom of the 9th inning, the Sox had the bases loaded and nobody out, Doyle occupying third base. Fred Lynn stepped to the plate and lifted a fly ball to shallow right field that was caught by George Foster. Mistaking third base coach Don Zimmer yelling 'NO NO NO!' for 'GO GO GO!', Doyle tagged up on the play and was cut down at the plate. The Reds forced extra innings moments later, enabling Carlton Fisk to wave his walk-off home run fair in the 12th inning.

Doyle had the fortune of recording the only hit in three one-hitters; against Nolan Ryan with the New York Mets in 1970; against Gary Nolan of the Reds in 1971 and against Steve Arlin of the San Diego Padres in 1972. Arlin had been one out away from immortality; to date (2019), no Padre hurler has ever thrown a no-hitter.

He is the brother of Brian Doyle and Blake Doyle.