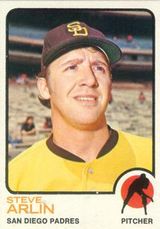 “He had a great arm, great stuff. Probably wasn’t the best command in the world, but on the days he had good command he was lights out. He just loved to compete. He did things the right way and he had an edge on him. It was a lot of fun to watch him compete and I learned a lot from him.” - Randy Jones, to the San Diego Union-Tribune, August 22, 2016

Steve Arlin led Ohio State to its only Division I Championship in 1966. Arlin had a 0.96 ERA in 47 College World Series innings in 1965-1966; as of 2019, he is still the all-time ERA leader in CWS play. The Philadelphia Phillies drafted him in the secondary phase of the 1966 amateur draft. He spent his first year with the Class A California League Bakersfield Bears where he was 7-6 with a 3.27 ERA. On July 25, 1967, while pitching for the Eastern League Reading Phillies, he threw a no-hitter against the York White Roses. Arlin pitched in the Phillies’ farm system again in 1968 before being selected by the San Diego Padres on October 14th of that year in the expansion draft.

Pitching for a struggling young team, Arlin led the National League in losses in both 1971 with 19 and 1972 with 21. He is the last pitcher to record 40 losses over two seasons. He also led the league in walks and wild pitches the latter season. In both seasons, he posted a respectable earned run average: 3.48 in 1971 and 3.60 in 1972, and struck out over 150 batters both years. Arlin had an especially curious 1972 season. He pitched a one-hitter and three two-hitters. In one, on July 18th against the Phillies, he had a no-hitter broken up by Denny Doyle with two out in the 9th. To date, this is the closest any Padres pitcher has come to pitching a no-hitter. He also had a 10-inning stint in which he allowed only one hit, yet he finished 10-21. In 1973 Arlin did record a personal best 11 victories against 14 losses, but his earned run average skyrocketed to 5.10. On June 21, 1974, the Padres traded Arlin to the Cleveland Indians for Terry Ley and Brent Strom. This proved to be Arlin's last year in professional baseball.

During his playing career Arlin began practicing dentistry, and became a dentist after his career ended. His major league record shows he won 34 games (11 of which were shutouts) while losing 67, with 463 strikeouts and a 4.33 earned run average in 789 innings pitched. He was the grandson of broadcaster Harold Arlin, who called the first major league game on the radio for KDKA radio in Pittsburgh in 1921.