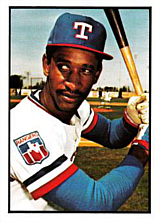 Outfielder Claudell Washington played seventeen seasons in the majors with seven different teams and was twice an All-Star.

Washington did not play high school baseball. Instead, he was discovered by the Oakland Athletics playing sandlot ball in Berkeley, California, and signed with the club as a 17-year-old in 1972. Two years later, in 1974, he reached the majors and hit .285 with the team in 73 games. In that fall's World Series, he went 4-for-7 as Oakland beat the Los Angeles Dodgers in five games. The next summer, in 1975, he hit .308 with 10 home runs to earn a spot on the American League All-Star squad.

Prior to the 1977 season, Washington was dealt to the Texas Rangers, and after a season and a half there, he was sent to the Chicago White Sox. In a July 14th, 1979 game for the Sox against the Detroit Tigers, he hit three home runs. The following summer, in 1980 he was traded to the New York Mets, and on June 22nd against the Dodgers, he again clubbed three homers. He became only the third player in major league history (Babe Ruth and Johnny Mize were the others) to hit three home runs in a game in each league.

In the film Ferris Bueller's Day Off, it is a foul ball off the bat of Claudell that the titular star catches at a Chicago Cubs game while playing hooky from school.

Washington's brother, Don Washington, was an outfielder in the Dodgers and A's chains from 1975 to 1977.

He was diagnosed with prostate cancer in 2017 and he died 3 years later from that disease at the age of 65.