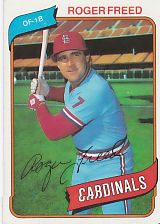 Roger Freed was signed by the Baltimore Orioles in 1966 and won the Northern League home run crown in his first two pro seasons. He spent most of 1970 with the Rochester Red Wings, where he hit .334 with 24 home runs and 130 RBI en route to being named International League co-MVP with George Kopacz. He made his big league debut with the O's that September, appearing in 4 games. However, the Orioles traded him to the Philadelphia Phillies that winter. He hit the first ever grand slam at Veterans Stadium on April 11, 1971.

After two years with the Phillies, he bounced around, from the Cleveland Indians to the Cincinnati Reds to the Mexican League before joining the Montreal Expos late in the 1976 season. That year, he hit 42 home runs for the Denver Bears and was named MVP of the American Association before playing a few late season games with the Expos. After that season, he was selected by the St. Louis Cardinals in the 1977 Rule V Draft. He spent three seasons with the Cards, largely appearing as a pinch hitter and wowing fans with late-inning heroics.