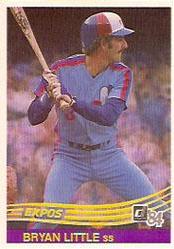 Bryan Little was born at the wrong time. In the major leagues, he was a frequent bunter, and would have been more valuable 100 years earlier. He had little power, and while his best slugging percentage (.340) beat Julio Cruz on the 1985 Chicago White Sox, it did not beat Ozzie Guillen the regular shortstop who slugged .358 that year.

Little won Bronze with Team USA in the 1979 Intercontinental Cup. made his major league debut in 1982 with the Montreal Expos, at a time when they were trying frantically to find a second baseman while struggling to keep pace in the NL East Division race. He succeeded Mike Gates in late July, but was only the starter briefly, as the Expos acquired veteran Doug Flynn from the Texas Rangers a few days later. In 1983, he beat out Chris Speier for the starting shortstop job in spring training, but could not hold the position as his hitting faded after a good start. He was a starter again at the beginning of 1984, this time at second base, but again he faded after a hot start. The Expos were convinced he did not have the stamina to play regularly in the majors, and sent him to the White Sox after the season, along with Bob James, in return for Vance Law and Bert Roberge. Some sources list these as two separate trades, because they had a major league and a minor league component, although they were announced simultaneously and are listed as a single deal in the Expos' media guide.

When he wasn't in the majors he played in the minors from 1980 to 1988, much of it in the American Association.

He is the brother of Boston Red Sox and Los Angeles Dodgers manager Grady Little.

After retiring, Little managed the Waterloo Diamonds in 1990-1991 and the High Desert Mavericks in 1992 in the San Diego Padres organization. He was then a roving minor league instructor in the Chicago White Sox chain from 1993 to 1997. He was the first base coach for the White Sox from 1997 to 2000 and has been the White Sox' Major League Advance Scout/Special Instructor since 2001 (as of 2013).