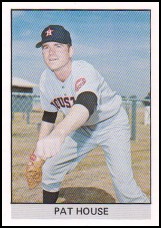 Pat House and Larry Jackson are the only two major league pitchers to have come from Boise State University as of 2019, and they were both in the National League at the same time.

He made his Major League debut on September 6, 1967 for the Houston Astros against the San Francisco Giants. In his first big league game, he threw a perfect inning in relief of Tom Dukes. The first batter House faced in the major leagues was Hall of Fame slugger Willie McCovey.

Interestingly, although he gave up 17 runs in 20 1/3 innings in his career, not one of those runs was the result of a home run. He did hit a rather high number of batters - about one every 6 2/3 innings.