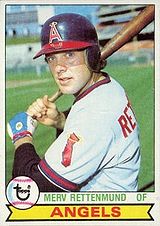 Merv Rettenmund played thirteen years in the majors, winning two World Series titles. Early in his career, he hit over .300, and towards the end, he was one of baseball's best pinch hitters.

After playing both baseball and football at Ball State College, Rettenmund was drafted by the Dallas Cowboys of the NFL but instead signed with the Baltimore Orioles late in 1964. With the Rochester Red Wings in 1968, he hit .331 with 22 home runs and was named International League MVP and Minor League Player of the Year. After making his debut in the majors in 1968, he was up for good in 1969, and he hit .322 with 18 homers for the O's in 1970 as his club won the World Series. The next season, 1971, he hit .318 and finished third in the American League in batting.

Following the 1973 season, Rettenmund was traded to the Cincinnati Reds, where he was mostly a platoon player. Prior to the 1976 campaign, he was dealt to the San Diego Padres, for whom he went 21-for-65 as a pinch-hitter in 1977. He ended his playing career with three seasons with the California Angels.

After his playing days were over, Rettenmund was a member of the Angels coaching staff in 1980 and 1981. From 1983 to 1985, he was the Texas Rangers hitting coach. After being let go by the Rangers, he spent 1986 to 1988 as a minor-league instructor for the Oakland Athletics and became their major-league hitting coach in 1989 and 1990. Beginning in 1991, he spent nine seasons as the Padres' hitting coach, before moving on to the Atlanta Braves in 2000 and 2001. The next season, 2002, he was a member of the Detroit Tigers staff. Following more than three years as a Toronto Blue Jays minor league instructor, he rejoined the Padres as hitting coach in June 2006. He was fired on July 31, 2007 and replaced by Wally Joyner.

On September 19, 1985, Merv appeared with his daughter, Cynthia, on the fourth episode of the game show Break the Bank.