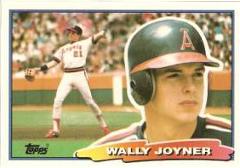 Wally Joyner was signed as a 3rd round pick in the 1983 amateur draft by the California Angels and scout Joe Maddon.

Joyner was a four-year letterman in baseball and basketball while at high school. He lettered for three years at Brigham Young University and was named an All-American.

In his first two seasons in the Majors, playing for the California Angels, he collected over 100 RBI. He played in the All-Star Game as a rookie in 1986. After those two years, he never drove in more than 96 runs. He collected his 300th career RBI on a game-winning, two-run single against the Texas Rangers in 1988.

Joyner played 16 seasons in the majors from 1986 to 2001, exclusively as a first baseman (with a few games as designated hitter), hitting .289 in over 2000 games. He showed limited power after his first two seasons, but his combination of a decent batting average and on-base percentage kept him as a starter in the major leagues until 1999. He played in one World Series, going hitless in 8 at-bats for the San Diego Padres when they were swept by the New York Yankees in 1998.

After his playing career, Joyner served as a special assistant to Padres general manager Kevin Towers in 2002. He spent 2003 as the Padres minor league hitting coordinator. The Padres named him their Major League hitting coach on July 31, 2007, replacing the fired Merv Rettenmund. He stayed in that role until he resigned on September 23, 2008 when it became clear he would be fired at season's end.

Following his Padres coaching stint, Joyner worked internationally for the next four years (2009-2012) with MLB International. He served as the lead hitting instructor for their development programs in other countries.

Joyner returned to the major leagues in 2013 as an assistant hitting coach with the Philadelphia Phillies. He added first base coaching duties on August 16th when manager Charlie Manuel was fired and replaced by coach Ryne Sandberg. In 2014, he moved to the Detroit Tigers organization as hitting coach under new manager Brad Ausmus. He resigned after the 2016 season.