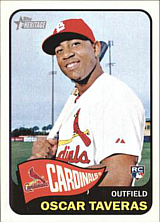 Oscar Taveras won a minor league batting title in 2011 and reached the big leagues in 2014, but was killed in an automobile accident after the season.

Taveras signed with the St. Louis Cardinals at age 16. He made his pro debut with the 2009 DSL Cardinals and hit .257/.338/.392 with 8 triples, 8 outfield assists and 42 RBI in 65 games. He tied for 8th in the Dominican Summer League in triples. In 2010, he played for the GCL Cardinals (5 for 30, 2B, BB) and Johnson City Cardinals (.322/.362/.526, 43 RBI in 53 games). In the Appalachian League postseason he was even better, going 8 for 16 with 5 RBI in four games to lead Johnson City to the title. He finished third in the league in batting average (behind Oswaldo Arcia and Ramon Morla), tied for 4th in RBI and 5th in slugging. He joined Arcia and Javier Rodriguez as the Appalachian League All-Star outfielders. Baseball America named him the 4th-best prospect in the loop, behind Carlos Perez, Enny Romero and Arcia and right ahead of Delino DeShields Jr. In 2011, Oscar dazzled for the Quad Cities River Bandits at .386/.444/.584 with 62 RBI in 78 games. He was 31 plate appearances shy of qualifying for the Midwest League batting title but was still given it as if he had gone 0 for 31, he still would have beaten Josh Whitaker's .326. He was not named to the MWL All-Star outfield as Rymer Liriano, Michael Choice and Jake Marisnick were picked instead. Baseball America listed him the 6th-best MWL prospect, between Liriano and Zach Lee.

Taveras started 2012 very well with the Springfield Cardinals at .324/.372/.593 with 17 home runs and 63 RBI in 80 games, adding more power to his already fine average. In the 2012 Futures Game, he started in right field and hitting 3rd for the World team. He grounded out against Jake Odorizzi in the 1st, hit a sacrifice fly off Danny Hultzen in the 3rd (scoring Jean Segura), singled off Tyler Skaggs in the 5th and flew out versus Taijuan Walker in the 8th in a 17-5 loss. He also made an error on a Tommy Joseph hit that let Nick Castellanos score. He moved to center when Arcia entered and Jae-hoon Ha left the game. He finished the season at .321 in 124 games, with 37 doubles and 23 homers, in addition to 83 runs scored and 94 RBI. He was named the Texas League Player of the Year and a Double A All-Star. He was slowed by an ankle injury in 2013, as he only played 47 games, most of them with the Memphis Redbirds of the Pacific Coast League, where he hit .306 with 5 homers and 32 RBI. He still returned to the Futures Game.

Given his shortened season in 2013, the Cardinals were not entertaining the thought of having Oscar start the 2014 season in the majors, even though he was rated the 3rd best prospect in baseball by both Baseball America and mlb.com before the season. He returned to Memphis, where he hit .325 in 49 games with 15 doubles and 7 homers. When the Cards needed an extra outfielder in the early going, it was minor league teammates Randal Grichuk and Joey Butler that got the call, as the team wanted to be patient with their prized youngster and did not want him to sit on the bench in St. Louis. With comparisons with Albert Pujols, he was called up to St. Louis on May 31, the result of an injury to first baseman Matt Adams. He was immediately inserted in the starting lineup against the San Francisco Giants, batting 6th and playing right field. He lined out to left in his first at bat in the 2nd then opened the score with a homer off Yusmeiro Petit in the 5th, finishing the game 1 for 3, as the Cardinals won, 2-0. However, he found the step a bit steep, as he hit only .189 with 2 RBI in 11 games and was sent back down when Adams came back on June 13, in order for him to continue to play regularly. The demotion lasted only a couple of weeks, as he was back with the Cards on July 1 and remained with the team until the end of the season. He again got a shot at starting regularly in right field during the month of August, but hit only .244/.292/.289. As a result, he was mostly a pinch-hitter in September, and finished the season with a batting line of .239/.278/.312 with 3 homers and 22 RBI in 80 games. In the postseason, it was Grichuk who was starting in right field but Taveras did see a lot of action as a pinch-hitter, going 3 for 7 in the role, with a highlight being the home run he hit off Jean Machi of the Giants in the 7th inning of Game 2 of the NLCS that tied the score at 3-3.

Taveras' final big league game was an unsuccessful pinch-hitting appearance in Game 5 of the NLCS, when the Cardinals were eliminated by San Francisco. He had the inside track to claim the starting right field job for the Cardinals in 2015, but tragedy struck and decided otherwise. On October 26, he and his girlfriend, Edilia Arvelo, were killed in a car accident near his hometown of Puerto Plata. He was 22 and his girlfriend only 18. His longtime friend, Giants outfielder Juan Perez, was playing in the World Series at the time. Commissioner Bud Selig issued a message of condolences on behalf of Major League Baseball stating that Taveras "was full of promise and at the dawn of a wonderful career in our game." On the day of his death, Taveras had spent the day with friends at a barbecue in Rio Jamao, and was driving home when a torrential downpour broke out. The accident report noted that Taveras lost control of his Chevy Camaro coming out of a curve on the slick pavement while driving at a very high speed and slammed into a tree; he died of multiple trauma while receiving medical attention at a nearby hospital. Neither passenger was wearing seat belts. Toxicology reports that were made public in the following days indicated that he was five times above the legal alcohol limit. The Cardinals decided to honor his memory by wearing a patch with his initials and his number, 18, during the 2015 season. They also funded the renovation of a ballpark in his home village of Sosua.

Taveras' older half-brother, Raul Burgos, pitched in the minor leagues from 2007 to 2011. His father, Francisco "Tato" Taveras, also played minor league baseball, although it is not clear under which name. Tato moved to Montreal, QC in 1993, where he was a youth baseball coach, and a few years later brought the young Oscar over to get him away from some of the bad influences of his native country. He played some junior baseball in Canada, but he was a poor student, was eventually kicked out of school and missed his home country. He moved back there knowing he could sign a contract to play baseball immediately, which is what happened.