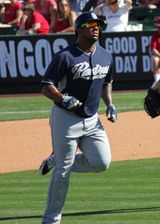 Outfielder Rymer Liriano made his big league debut in 2014.

Liriano signed with the San Diego Padres shortly after his 16th birthday for a $300,000 bonus; the scouts were Randy Smith and Felix Francisco. He hit .198/.296/.379 with 9 home runs in 67 games for the 2008 DSL Padres in his pro debut, striking out an incredible 106 times in 232 at-bats. He tied Kelvin De Leon, Starling Marte and another player for 4th in the Dominican Summer League in dingers but also ranked second in strikeouts. He came stateside in 2009 with the AZL Padres and painted a very different picture, hitting .350/.398/.523 with 44 runs and 44 RBI in 50 games. The only negative was 8 outfield errors, most in the Arizona League. He was 5th in the loop in average, 8th in slugging, tied for 7th in OPS, 6th in runs and 3rd in RBI (after Cody Decker and Randal Grichuk). Baseball America ranked him as the 4th-best Arizona League prospect, between Allen Webster and Grichuk.

Liriano had a superb 2011 with the TinCaps (.319/.383/.499, 30 2B, 8 3B, 81 R, 65 SB, 20 CS, 11 E in 116 G) but sputtered in 15 games for the Storm (.127/.213/.182). He was among the Midwest League leaders in a slew of categories: steals (2nd, a distant 38 behind Billy Hamilton), times caught stealing (tied for first with Hamilton), average (4th, after Oscar Taveras, Josh Whitaker and Jake Marisnick), hits (145, 5th), triples (tied for 5th), runs (6th), slugging (6th) and OBP (8th). He led San Diego farmhands in steals and tied Reymond Fuentes for the most triples (9). He, Marisnick and Michael Choice were named the MWL All-Star outfielders, but Liriano won the MVP and Prospect of the Year Awards as well. Baseball America ranked him as San Diego's 3rd-best prospect and as the 5th-best MWL prospect (after Taijuan Walker, Hamilton, Marisnick and Nick Castellanos and just ahead of Taveras). They also named him the "Most Exciting Player" in the Midwest League.

In spite of the lost year, Rymer did not miss a beat when he returned to San Antonio to start the 2014 season. In 99 games, he hit .264 with 20 doubles, 14 homers and 53 RBIs. He was promoted to AAA in late July, joining the El Paso Chihuahuas. There, he immediately went on a scorching hitting streak, banging out 28 hits in 16 games for a .452 average. Although he did not go deep, he collected 11 doubles during that span, scored 14 runs and drove in 13. The Padres were dealing with an anemic offense at that time, so his heroics resulted in a quick call to San Diego, where he made his big league debut on August 11th. He went 0 for 2 that day, facing the Colorado Rockies while playing right field; he did drive in a run with a sacrifice fly in the 6th inning and was also hit by a pitch as San Diego won, 4-3. He collected his first big league hit the next day, a 4th-inning single off Yohan Flande in another defeat of the Rox. In all, he played 38 games for San Diego, all of them in right field, and hit .220 with 1 homer and 6 RBIs. The Padres made a number of moves the following off-season, resulting in a surplus of established major league outfielders and crowding out Rymer. As a result, he spent the 2015 season at El Paso, where he hit .292/.383/.460 in 131 games, with 31 doubles, 14 homers, 85 runs and 64 RBIs. Those numbers should have peeked the Padres' interest, given the major league team's season was a major disappointment, but in early January of 2016 he was designated for assignment to make room on the roster for free agent signee Alexei Ramirez. On January 28th, he was traded to the Milwaukee Brewers in return for P Trevor Seidenberger.

Liriano suffered facial fractures after being hit by a pitch in a Cactus League game for the Brewers on March 20, 2016. The pitch by Matt West of the Los Angeles Dodgers hit him just under the brim of the helmet, in the left side of the face. He was placed on the disabled list to start the year.