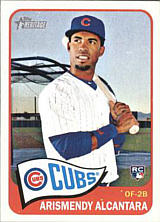 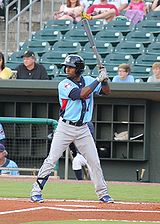 Arismendy Alcántara is an outfielder and infielder who made his major league debut in 2014.

Arismendy had a very hot start for the Cubs after making his major league debut on July 9, 2014: after four games, he was hitting .389. He went 7 for 18 with 2 doubles and a triple, scoring 5 times and driving in 3. He started his first three games at second base and the fourth in center field, a position he had played for the first time in Triple A earlier that year. He had originally been promoted to the majors because starting second baseman Darwin Barney had taken paternity leave while Emilio Bonifacio was on the disabled list, but when Bonifacio was ready to return on July 22nd, the Cubs decided to cut Barney instead of sending Arismendy back to the minor leagues. His bat would cool off, as he finished the year batting a paltry .205/.254/.367 in 300 plate appearances.

Alcántara found himself usurped the next season by Javier Baez in Chicago's plans, appearing in just 11 games. He was with Triple A Iowa in 2016 when the Cubs dealt him to the Oakland Athletics for former Rookie of the Year Chris Coghlan. He was unable to establish himself with the bat by the bay (.211/.211/.363 in 19 plate appearances in '16) and with the Cincinnati Reds (.171/.187/.248 in 108 plate appearances) in 2017, venturing to the Mexican League for 2018. He spent the 2019 season shuttling between Double A and Triple A in the New York Mets organization.