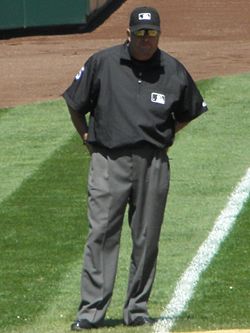 Dale Scott was a Major League umpire starting in 1985, when he umpired one game. He was added to the American League's roster of umpires the following year, 1986. Things did not work out well as first, as he was very poorly rated by the league after his first season and could easily have been fired. However, he got a second chance when veteran umpires Marty Springstead and Rich Garcia worked with him on his technique and positioning, and he showed rapid improvement.

He was later designated a crew chief, serving in the position for 16 seasons, and was the home plate umpire at the 2011 All-Star Game. He also worked the 1993 All-Star Game and the 2001 All-Star Game. He worked his first postseason series in 1995, during the two American League Division Series played that year and regularly worked postseason games after that. He was on the umpiring crew for the 1998, 2001 and 2004 World Series.

A normally quiet figure well-respected by peers and players alike, Scott made national news on December 2, 2014 when he came out as gay in a national magazine story about him. He did it in a typically understated manner, presenting his long-time life partner Michael Rausch in the story. The two were officially married in November 2013 after having been together since 1986. Many of his friends in the game and fellow umpires were already aware of his situation, and the response to his coming out was overwhelmingly positive, a sign of how much mentalities had evolved in recent years. Commissioner Bud Selig stated: "To his friends and colleagues throughout the game, Dale is universally regarded as a class act. All of us at Major League Baseball are very proud of him, just as we have always been."

In the first inning of his first game of spring training in 2015, on March 5th, he was struck on the left forearm by a foul tip and had to leave the game. Jim Joyce went behind the mound to call balls and strikes for a spell, while Mark Ripperger rushed off to put on the home plate umpire's equipment. In a regular season game, the game would have been interrupted at that point, but Joyce felt it would have been unfair for the pitchers to have to stand around for 20 minutes at a time when they were still working to loosen their arms, so he worked the contest alone for a spell, in 19th century fashion. On April 14, 2017, Scott was struck in the mask by a foul tip off the bat of Mark Trumbo and had to be taken to hospital with a concussion. It was his second concussion in nine months and fourth in five years. It turned out to be his final major league game, as after the season, he announced his retirement, saying he would rather stop working at 58 then risk another concussion. He had worked a total of 3,897 games in 33 seasons. In a bit of trivia, he was the last umpire to eject hot-tempered manager Billy Martin from a game, on May 30, 1988.

He and pitcher Don Carman were born on the same day as all-time basketball great Magic Johnson. He published his autobiography in 2022, co-written with Rob Neyer.