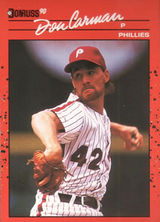 Don Carman was signed as a free agent on August 25, 1978 by the Philadelphia Phillies and scout Doug Gassaway. He pitched parts of ten seasons in the big leagues, one as a relief ace (9-4, 2.08 and 7 saves in 71 games in 1985) as well as three seasons of double-digit victories and two (1987 and 1988) as a trusted, regular hand in the Phillies' rotation.

On August 20, 1986, having moved to the rotation for the remainder of the season, Don was three outs from immortality with a perfect game cooking against the San Francisco Giants at Candlestick Park. Unfortunately, a fly ball off the bat of Bob Brenly that was nearly chased down by Milt Thompson instead kicked off his glove. With a home book in effect, Brenly was given a hit. Further unfortunately for Don, the Phillies had not scored any runs, so even if it had been an error, he could not do the deal alone anyway. He was lifted for Jeff Stone in the top of the 10th, when Juan Samuel connected with a solo home run, at least getting Don credit for the W. A few weeks later, he at least got credit for a solo shutout, blanking the Pittsburgh Pirates on four hits on September 15th.

With 13 wins and 211 innings, 1987 may have been Don's best season. He spun a three-hit shutout against the San Diego Padres in May, then, with the New York Mets fighting for their playoff lives, Don permitted just one hit, a single to Mookie Wilson, in shutting them out, 3-0, at The Vet on September 29th. The magic evaporated for Don in a 5-15, 5.24 season in 1989, and he spent the next three seasons with three teams before it was all over.

In 2006, Don was featured in the Tampa Bay Times in a piece about how he had finally gotten around to answering all of his fan mail from days gone by.

He and umpire Dale Scott were born on the same day as all-time basketball great Magic Johnson, though it is unknown whether Dale and Don have also made any marinas/boats Hall of Fames like Magic purports to have on Twitter.