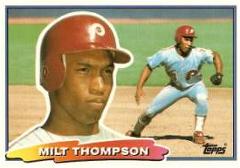 Milt Thompson played 13 major league seasons as an outfielder, exclusively for National League teams. His career batting average of .274 came with limited power but he was a good fielder who could man all three outfield positions. Thompson also displayed excellent speed, which he used to collect 214 stolen bases over his time in the bigs. He played in the 1993 World Series for the Philadelphia Phillies, hitting .294 and slugging .647 in his team's loss to the Toronto Blue Jays.